Up early in the morning  to walk through dappled light to the dairy that’s nestled by a babbling brook. The cheese makers’ life? Well not exactly, as Nick Harman finds out

‘I don’t like getting up too early, so I don’t,’ says Philip Wilton  of Wildes Cheese leading me into his dairy. Outside far from being a vista of green fields and rolling hills, the view is of grey skies glowering over the streets of North London, as well as the bulk of Spurs’ football stadium just down the road.

‘You should have seen this place when I took it on,’ adds Philip as we wet our shoe soles in antiseptic and put on white coats, ‘it was a right mess.’ Actually he uses a stronger description; his cheerful conversation is peppered with expletives. He has created a proper dairy, three fully fitted out rooms, in a tiny unit on an anonymous industrial estate, a dairy so small you couldn’t swing a kitten in it, much less a cat.

One room houses the milk vat, ‘it’s too small at 100 litres,’ says Philip eyeing it pensively,’ it’s second hand  and when I got it I couldn’t afford anything else and I didn’t think I’d need a bigger one that soon anyway, I wanted to start small and grow little by little, but I definitely need to get something  larger. I’m making five brews  a week now.’ He certainly does need to step up production; the cheeses he creates in these unprepossessing surroundings are already in big demand. He sells them at various North London farmers’ markets and a number of restaurants are buying them too. He even went down to South London, to Brixton, to sell to Cannon and Cannon.

Redundancy from a job as a management consultant a few years back gave Philip a reasonable cash pay off and the freedom and incentive to do something he really wanted to do, a business of his own. ‘I did a course at an agricultural college in Nantwich at weekends, and then when I realised you don’t need to be somewhere like Dorset to make cheese, you can do it just as well in town, I spent time around my area trying to find a small low rent unit to set up in and finally found this.’

‘Each room is at a slightly different temperature and air flow so I can control humidity and the maturing’, he says pulling aside special plastic curtains to reveal his ‘caves’. ‘I make on average five to six cheeses as regulars that always sell well and once a month some random tries to see what happens. It’s not always successful, I’ve made some awful cheeses!’ he admits with laughter.

He washes selected cheeses in Redemption Beer, a local ale, to create a characterful rind, and the milk comes from a single herd farmer in Suffolk around 100 litres a day which creates about 110 kilos of cheese.

Many of his unique young cheeses have found a ready market with Eastern Europeans in the area. ‘They know what to do with fresh cheese; they put it in salads and fruit salads,’ he explains, suddenly producing a car scissor jack. ‘It’s for the cheese vat,’ he explains setting it down on the floor, ’the stupid vat doesn’t have its drain hole at the right height so I have to jack up one end to get all the whey drained out properly,’ he cackles cheerfully and starts winding the handle whilst the vat obligingly tips up like a car about to undergo major underside surgery.

‘The farmers markets I can be more relaxed about, a little variation week by week is okay, but the shops and restaurants want consistency, so timing at this point is crucial. Slow enough drain for the curds to continue solidifying, not so slow as to let excess acidity build up.’ The scissor jack may be crude but it gives him control. 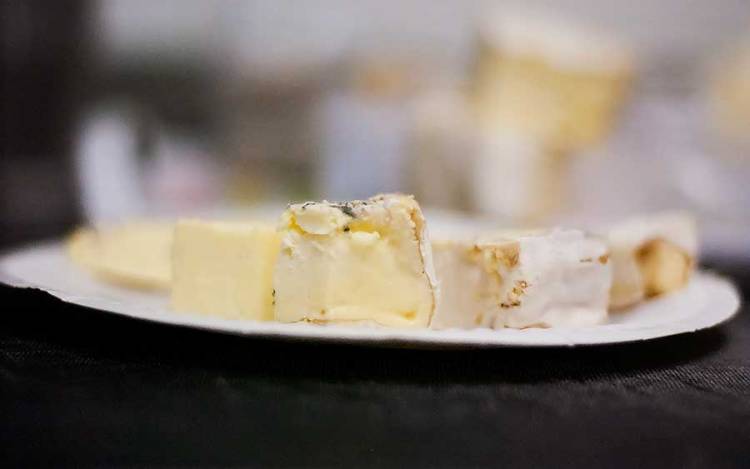 While the whey drains, most of it ends up going to a pig farm and some to a local brewer, ‘he’s fermenting something, I don’t know what!’ Philip fetches some cheeses from store for us to try. Wildes Number 1 is pleasantly mild and creamy having  been brined for around two months, while Wildes Number 4 (The Londonshire)  is my favourite as it has a runny centre but a velvety rind and is just the kind of cheese I like best. Wildes Number 5 has had the rind wash of Redemption brewery’s Hopspur to create the coat and  Wildes Number 6, the Ally Pally White a harder cheese made especially for Alexandra Palace market, has more maturity.

Still in his own infancy as a cheese maker, Philip clearly has the dedication and passion to mature nicely to a bigger cheese vat and bigger clientele. And as a former management consultant he’s got the business brains too, something many keen artisans lack and which handicaps their fledgling industry. ‘The standard business model is to make a few cheeses and sell them wide,’ says Philip as he waves me off across the estate my bag bulging with cheese, ‘my model is to make more cheeses and only sell them locally.’

A local artisan for local people, basically,’ he says. And with that, sounding like a cheese maker from Royston Vasey, not Tottenham, he disappears back inside to see about more cheese.

Wilde’s cheeses can be found at

You can also find the cheese at:

You can find Wildes cheese on the menu at: