The dark interior the of sherry bodega in Jerez stretches away to what seems like infinity. On each side black painted barrels are stacked in Goth splendour three barrels high. Outside, even in September, the sky is a brilliant blue and the temperature is enough to make pedestrians hug the shady side of the street and drivers turn up the aircon full blast.

Inside it smells musty and mouldy and of sherry. It’s an aroma redolent of Christmas and Sunday dinners, and for anyone of a certain age it’sHarveys Bristol Cream that immediately springs to mind. Which is apt, as this is where it comes from

This bodega belongs to Beam Suntory, one of the biggest drinks brands in the world but in the courtyard between bodegas is the bust of Don Pedro Domecq y Loustau, a part of whose name most of us are familiar with. This was his world, where he created Fundador, the sherry brandy and this is the spiritual home of Harveys.

How the cream was created

In the mid to late 1880s, Bristol wine merchants John Harvey II and his brother Edward Harvey developed the world’s first cream sherry by blending three sherry types: Fino, Amontillado, and Oloroso  to which Pedro Ximénez wine was added to give sweetness, richness and creaminess, the result was Harvey’s Bristol Cream.

Many younger people today think only of it as something a bit sticky, served in one of those dated schooner glasses, and drunk warm. Unlike its close cousin Fino, it hasn’t really got hipster street cred. 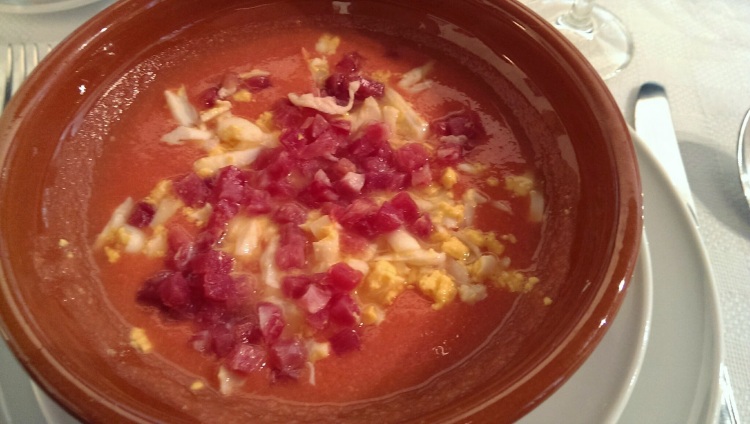 But as I hide from the sun and sip a glass of chilled Bristol Cream served on the rocks and with a slice of orange from nearby Seville, I realise this is unfair. Served cold to cut the viscosity and with that orange fragrance and citric tang mixing with the nutty almonds and dried fruit flavours, it’s a very satisfying drink. Add a handful of actual toasted almonds to nibble on and you have the perfect pre-dinner drink or early evening livener.

We go on to have lunch in the private room of the bodega – a cold tomato soup called Salmorejo, a chunky cousin of gazpacho that’s thick withjamón ibérico and egg as well as a deadly amount of garlic, all accompanied by sherries of course. Who needs wine?

The Palomino grape is the foundation of all the sherries, with the Pedro Ximénez grape used to create the sweeter sherries. Picked in September these grapes are traditionally laid out on straw mats in the still fierce sun to dry out and concentrate their flavour.

Sherry is produced by the Solera system, which means literally “on the ground” in Spanish. The grapes are fermented in the usual way and then left in half filled barrels where a coating of flor, a thick layer of yeast occurs.

The liquids are transferred bit by bit over at least three years from newest barrel to the oldest barrel, top to bottom, each being replenished of what it has lost by the newer above it. This fresh wine feeds the yeasts. The oldest mixtures are in the barrel that’s “on the ground” and that’s what’s used for the final product. Usually some brandy is added to fortify the sherry and also to stop the flor process which can’t survive in alcohol levels above 16%.

That evening it’s the opening of the grape harvest festival celebrations, an event held in front of the cathedral. It seems the whole town is here to hear the blessing be read over the grapes and to see the traditionally dressed women put the grapes in a giant trough to be trampled in the old way by pisadores (labourers) wearing zapatos de pisar—cowhide boots with angled nails.

The murky liquid flows, some brave people even drink it, but we escape to El Bichero Restaurant  in The Old Fish Market or Calle Pescaderia Vieja to drink much more palatable sherry and eat artichokes cooked in Fino all followed by a superb fish dinner. The owner brings out a raw sea bass to show how fresh it is, and it obliges by flapping hard and trying to escape. 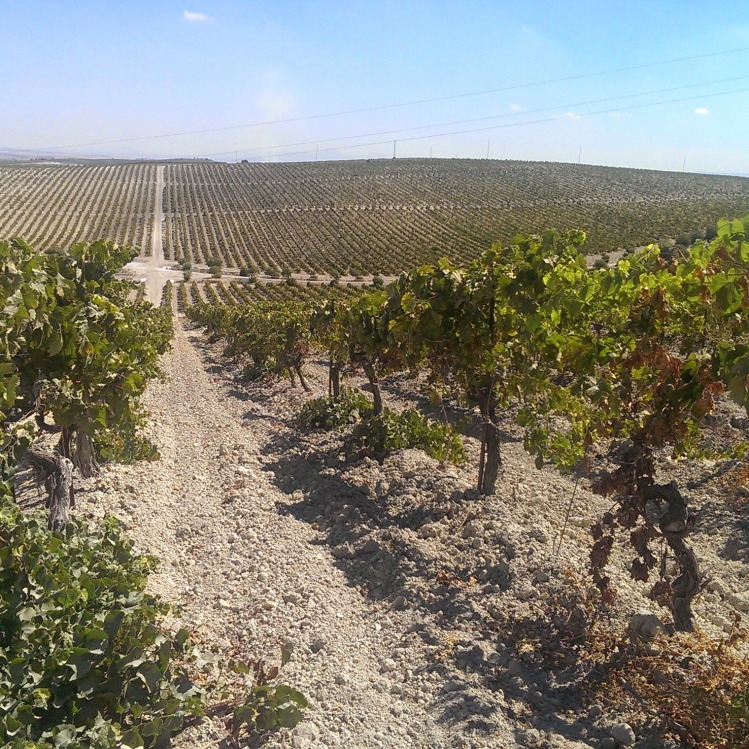 Next day it’s out under that hot sky to the massive vineyards, the soil here is so very white that the sun bouncing off it hurts your eyes. This chalk soil ‘Albariza’ absorbs the winter rains and when the sun returns in spring the top few inches bake hard forming a tough lid that traps all that moisture for the deep rooting vines to use all summer. The sea is visible for almost 180 degrees in the distance and this provides moist winds to give the grapes further character and cool them slightly. 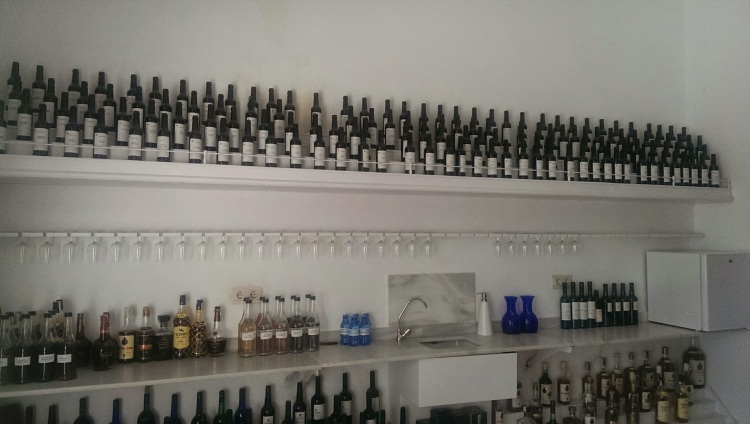 Back at the Domecq bodega we head to the tasting room to try a range of Harvey’s sherries including Fino, Amontillado, Oloroso and pure Pedro Ximénez. The latter comes out of the bottle with the speed of a lethargic snail and has the most remarkable flavours of raisins and molasses. It’s rather like drinking a liquidised Christmas cake. Quite delicious and a treat if poured over an ice cream or otherwise used imaginatively in desserts.

A new sherry is tried, Signature by Harveys, a new premium 12 Year Old cream. Created by Harveys’ award-winning wine maker, Manuel J, Valcarcel, in Jerez, it’ll be available in Tesco from October at a RRP £11.99.

It rather cleverly combines the richness of Cream with the lighter touch of Fino and I can see this becoming very popular in London’s tapas bar, hitting as it does that middle ground.

Jerez is sherry is Jerez

The name Sherry derives from Jerez and the town is certainly sherry-town. All the major sherry brands have bodegas here that can be visited, while the old town centre, with its superb fish market and crowded cafes and bars, is a must see.

And while in Jerez don’t miss out on Flamenco, which is something of a local obsession, and The Royal Andalusian School of Equestrian Art where there is a horse show most days of stunning choreographed dressage, accompanied by Spanish music and in 18th century style costumes.

Normally I leave Spain with a baggage allowance-threatening number of bottles but the beauty of sherry is that you can buy it all in your local supermarket.

So don’t save sherry for Sunday, crack open a bottle today. And while a Fino has to be drunk on the day of opening, the darker sherries will last days, even a week or more – if you can resist them.

I was a  guest of Beam Suntory. Other sherries are available.

Not made with the flor process, twelve years old and spicy and rich.

Made when the flor goes ‘wrong’. Thirty years old and becoming a bit of a cult.

The daddy. Often up to thirty years aged and capable of rendering people speechless with happiness.