If you’ve always thought a cruise was not for you then it may be time to think again, after all where else can you get to eat in 18 different restaurants only a short stroll from your bedroom? 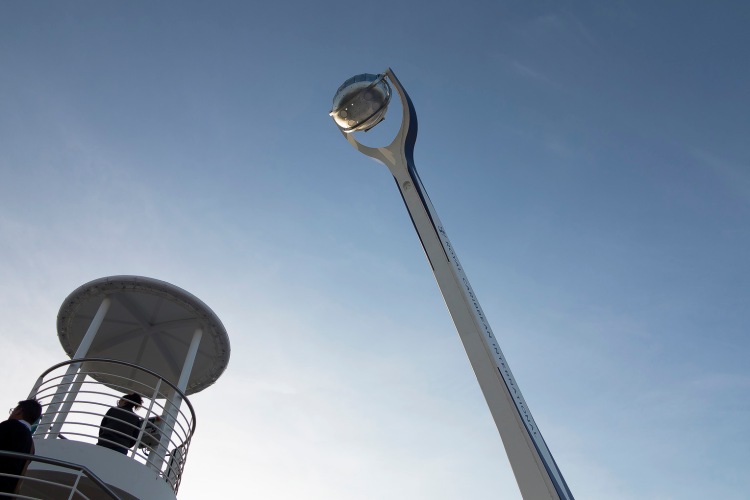 A stomach-boggling variety of eateries is only one of the attractions of the just launched Royal Caribbean cruise ship Quantum of the Seas, the third biggest cruise ship in the world at 347 m and one able to carry 4,000 passengers. 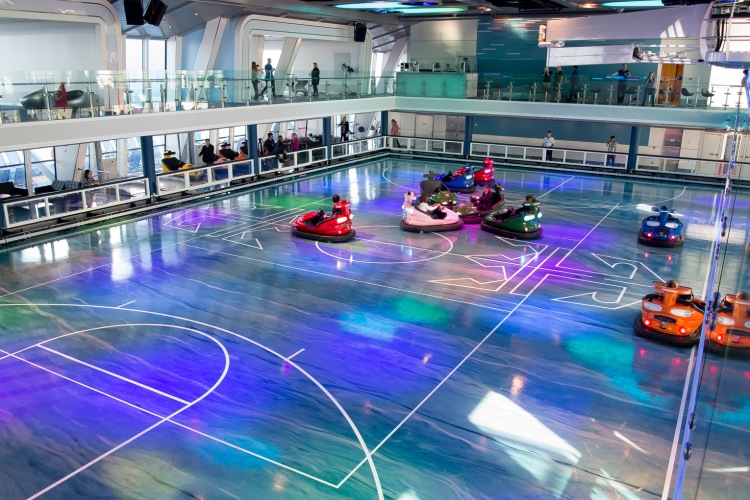 Onboard are the first dodgems at sea, the first trapeze, the first skydive simulator – Ripcord by iFLY – the first Jamie’s Italian, the North Star – a stomach fluttering glass pod that swings out and over the ship to give you a helicopter view – and the Bionic Bar where two hyperactive robots log your order and then go into blurred motion at the optics, the ice dispenser and the mixer taps before finally giving it all a good shake and sliding your refreshing beverage towards you. 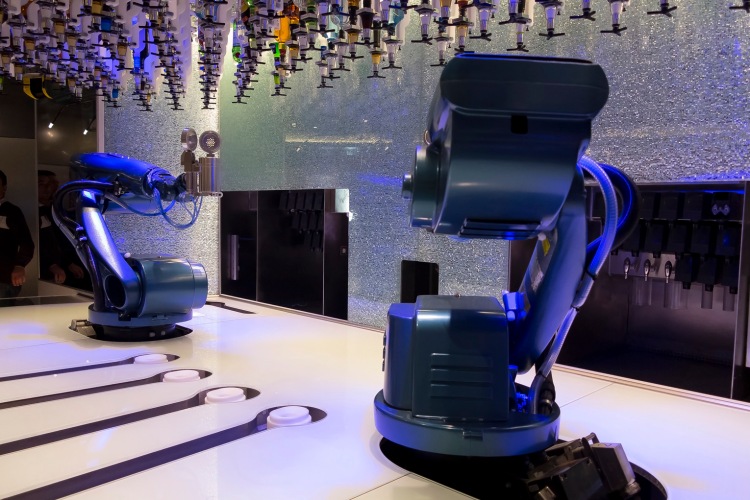 I’m very impressed. From the hi tec pain free check-in at Southampton to the fancy chip-enabled ‘WOWband’ on my wrist that opens my stateroom door, as well as letting me ‘pay’ at the bars and reserve tables in the restaurants, it’s all hi -tec to the max.

And let’s not forget those restaurants, I’m only taking a short ‘media experience’ cruise out past Lands End and back and I work out that I’d  need to eat every 2.6 hours, as well as not sleep, to try them all, which is a shame as I would dearly like to.

Eating on cruise ships is very important – days at sea are made entertaining by the kind of things mentioned above, but eating is what really keeps the customers calm and content.

The Quantum’s giant self-service restaurant, Windjammer, covers a large part of one of the topmost decks and has eats for everyone – American, Italian, Asian, Salads (ha-ha as if) and fresh baked breads and just about anything a hungry sailor could want.

I staggered back and forth at lunch in a tizzy of indecision and naked greed before making a wild multicultural selection and carting it back to a window table and tucking in. It was really rather good and like nearly all the restaurants on board is included in the ticket price. 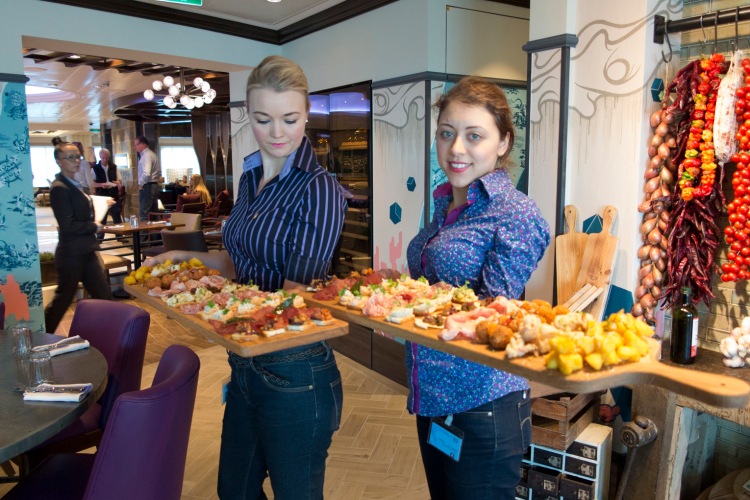 Jamie’s though will cost you a bit extra, it’s like any Jamie’s Italian you’ve ever been in but as Quantum will have a lot of non-UK passengers it will be new to them. A quick sample of what’s on offers reveals it to be just as good as any land based Jamie’s,  which is to say perfectly okay but as usual a bit lacking in something, anima perhaps.

More exotic is Wonderland, a restaurant designed to be ethereal and where food is created in an El Bulli kind of way with plenty of dry ice and intriguing creations intended to amaze as much as feed.

If that’s a bit too fey for you there’s Chop’s Grille where I downed a mighty good steak, and Johnny Rockets where burgers rule and coals come to Newcastle with lots of American food choice. 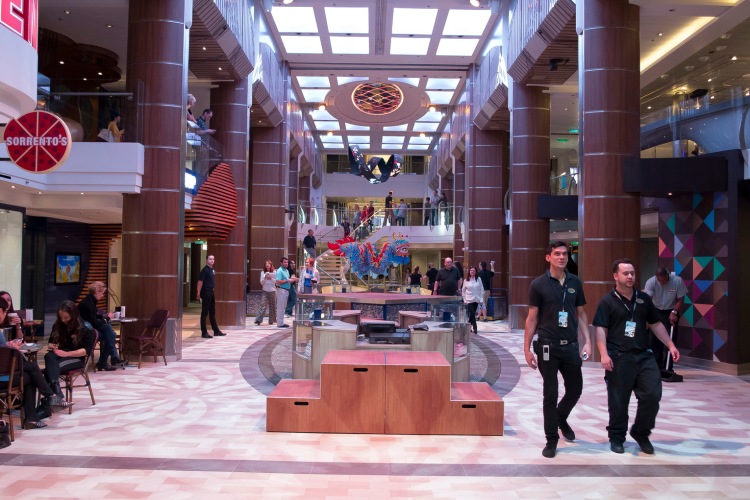 Down in the mighty Royal Esplanade area, so massive all notion of being on a ship is forgotten, Michael’s Genuine Pub has James Beard Award-winner Michael Schwartz’s simple and tasty small plates menu and his own craft brew. It’s nothing like a genuine pub of course, but it’s perfectly located to meet people and suitably cosy and dark inside. Good beer too.

For those feeling a bit unhealthy there is the Solarium Bistro and Devinly Decadence, a menu of low calorie dishes from bestselling author and Chef Devin Alexander. I really liked this place tucked away at the top of the ship, it was relaxed and airy and the food heavy on taste. Devin herself was flitting about and handing out some very good cakes, again all low on calories.

I found impressive Japanese food at Izumi with sushi, sashimi and tableside cooking using Hot Rocks and I was impressed by The Café @ Two70°. a choose your own salad and Panini kind of place next to the remarkable theatre area where the night’s show, using state of the art screens and live performance, won over this cynical cruiser completely.

The dining concept overall is called Dynamic Dining, intended as they say to ‘give you more distinct options and total flexibility. There are no set dinner times, no required formal nights’. This may not mean much to non-cruisers but is very much a change from the norm that you get on board P&O liners for example.

The restaurant choice is as huge as the ship and even with my limited time tucking in I can tell you that it’s really very good, even the breakfast is remarkable for choice and freshness. 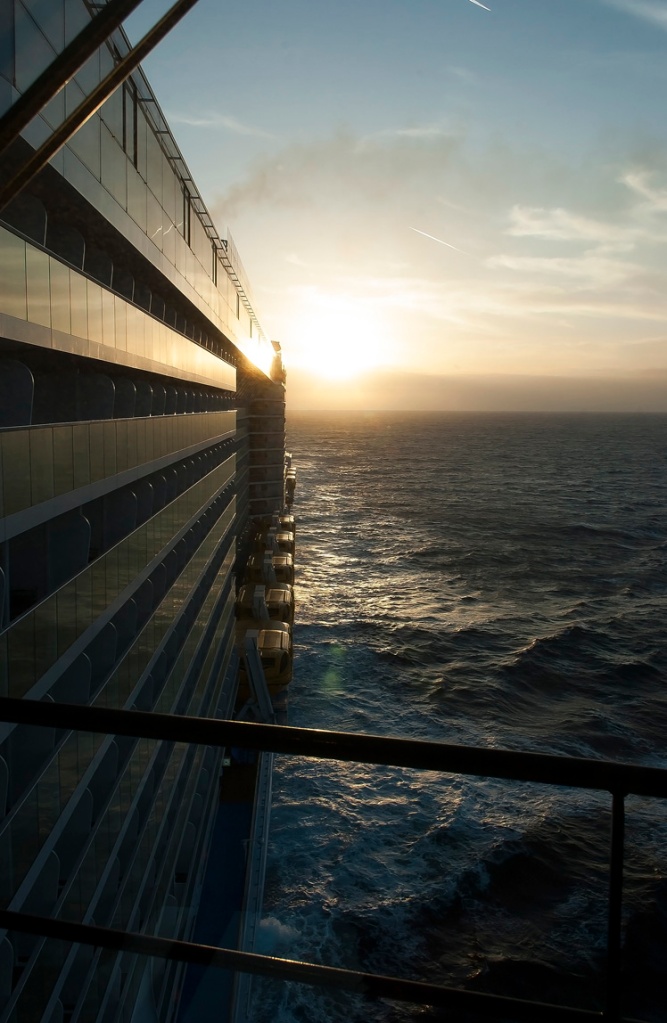 With its superb staterooms (aka cabins) nearly all with balconies ( and those that don’t have clever virtual balconies), solarium, pools, theatres, teenager areas all kitted out with X-Box and more entertainment and eating options than the average small town, the Quantum of the Seas really is something. All aboard!

Royal Caribbean’s ‘Quantum of the Seas’ sails on a two-night sampler cruise from New York City on 21 November, with prices starting at £376 per person, cruise-only. She sails in the Caribbean until February (eight nights from £1,499pp with flights) before relocating to Asia.