Nick finds out of ski season Switzerland is all about lush landscapes, fine vistas and plenty of cheese and chocolate.

Interlaken is a centre for tandem parasailing

The parasailers circle over town like colourful vultures, perhaps lured by the smell of cheese? It’s hard to avoid the aromas of Emmentaler in a country where it’s eaten as often as we eat cheddar.

The holes are made by the trapped gases during maturation

Emmentaler with its classic ‘cartoon’ holes is often regarded as a cheese suitable only for children, but Emmental eaten in Switzerland is another taste experience altogether.The milk of course is crucial, in Switzerland it comes from cows that graze on grass made lush by the snow melt.

I saw this process at the Emmentaler Show Dairy where in addition to a modern dairy to visit, there are demonstrations of the old ways too, all wood-fired copper vats and seriously heavy lifting.

View the dairy through glass walls

The enormous cheeses are aged in modern atmosphere-controlled rooms or in cellars under homes with classic Emmentaler being four months, reserve eight months and Premier Cru 14 months.

Under the houses lies buried treasure

Emmental itself is a region of gently rolling hills, long ridges, charming valleys and steep rifts, best viewed from the local bus. Tourist travel in Switzerland is made easy by the Swiss Travel System Ltd pass, an all-in-one 1st class travel ticket that works for train, bus and boat and gives a 50% price reduction on most mountain railways. And yes, before you ask, it does all run like clockwork. 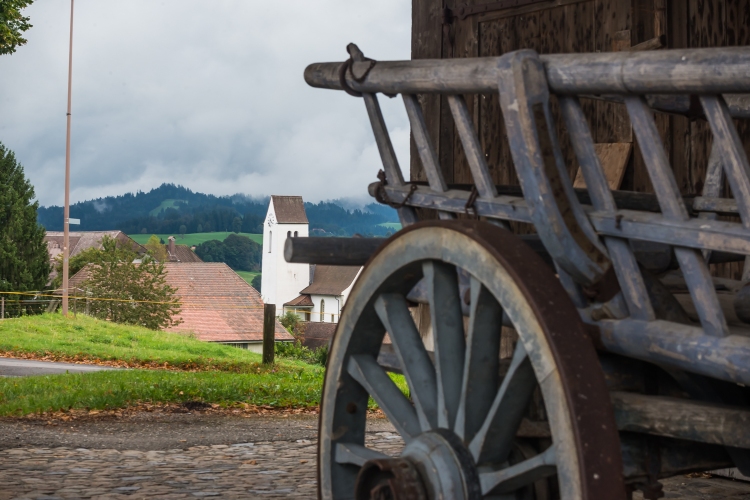 I made the most of it, first travelling from Zurich airport to the town of Bern efficiently and in comfort, able to relax and take in the scenery that fills the windows like a living iMax screen.

Bern, the Swiss capital since 1848 has an Old Town that’s a UNESCO World Heritage Site. The roaring River Aare runs deep below and above it there are viewing areas, promenades and narrow streets that once saw Albert Einstein wandering about. His apartment is now open to tourists and relatively (sic) easy to visit.

A climb up Bern’s clock tower, the Zytglogge built in 1530, is a must for the great views over town and to see its ancient machinery in action. The giant cogs and gears not only drive the enormous clock and astrolabe but also power a troupe of dancing bears and a giant bellows that blows a cheerful cockerel’s call on the hour.

Lunch after in the Restaurant Kornhauskeller was impressive, The Granary (Kornhauskeller) is a massive, almost Baronial underground room with striking Münger frescoes and serves traditional cuisine with Bernese specialities.

A dramatic place to dine

Great views can also be had from Gurten – Park reached by a steep funicular. Here I had dinner at Restaurant Bel Etage with its seasonal monthly menu.

The view competes with the food for attention and afterwards descending towards the lights of town was like coming in to land in a 747, but with a seat in the cockpit 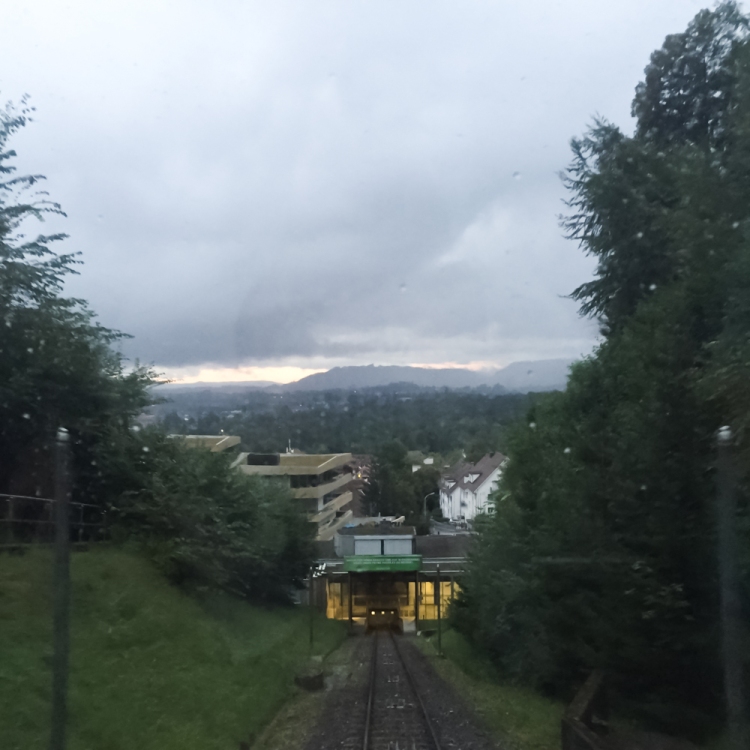 The funicular is a lot of fun

Bern makes an excellent base to travel from. I took a train to Interlaken, the name means ‘between two lakes’ and soon we running alongside of the largest of those lakes.

Lake Thun is the gateway to the Bernese Oberland and the subtropical vegetation around it has given the region the name the “Riviera of Lake Thun”. Pleasure boats and paddle steamers give access to villages that can’t be reached by road and the whole area is bucolic and beautiful, surrounded by Romanesque churches and towering peaks.

An unusual sight in Switzerland

Pretty Interlaken is the heart of the Jungfrau region, the famous mountain boasting the highest railway station in Europe. I never got up that far, instead I got off at Wengen, after an ear-popping ascent, to meet my guide and pick up our fondue kit.

We took a cable car up higher and higher, each transfer over a pylon making the cabin swing pendulously, causing inadvertent screams from the small children as well as me.

Can be scary at first

Up top the cows professionally, and almost wearily, posed for photos against the scenery as we found the perfect spot, set up our gas burner and got the cheese bubbling 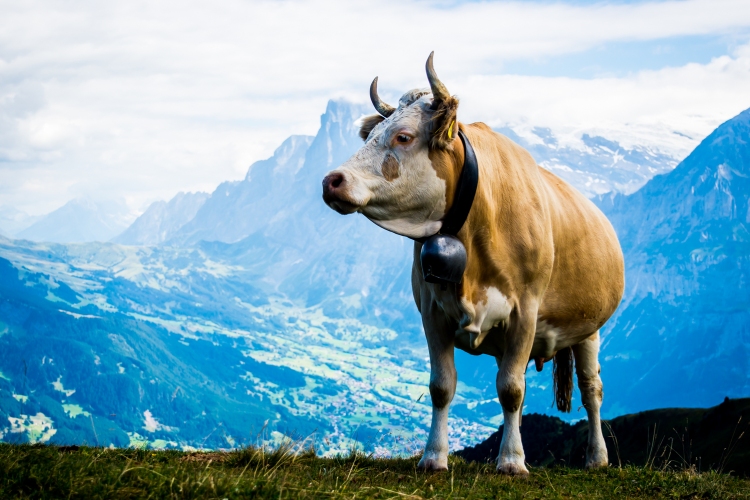 Thousands of feet up, the cows are in charge

.You have to have fondue in Switzerland at least once and, as we dipped our bread and drank our wine in view of the Eiger, it was clear this was probably the best place in the world to eat molten cheese. The tourist office in Wengen can supply a fondue backpack like ours for anyone who orders in advance.

Back in Interlaken I visited a traditional woodcarver and then the Funky Chocolate Club to find out about chocolate’s history and production.

Chocolate moulds to not show your mother

Truly edible chocolate was invented in Bern in 1879 by a chap called Rodolphe Lindt  who added cocoa butter and, almost accidentally, discovered the alchemic conching process that every chocolatier uses today. He might not have approved of some of the chocolate moulds the shop sold, though.

Restaurant Luegibrüggli that evening was another place where the view was the main dish.Stuck onto the hillside, its dining room and terrace have looked out over lakes Thun and Brienz since 1880 and the bus stop from town is handily just outside. Food is classic and beer local and it’s a cosy welcoming place all year round, as well as a local favouri

All this food needed exercise to offset it so the next day it was off to Erlenbach and a cable car up the Stockhorn to take food and exercise on the Culinary Trail of regional products all sourced from farms in the region.

First a cheese salad halfway up, then another cable car and, after a vertiginous visit to a viewing platform hanging on a sheer drop, a sausage main course at the top ready for the hike down.

The cheese is shaved into rolls

It was a pretty challenging 45 minute descent made slower by my need to stop every five minutes to revel in the 360 degree panoramas and sympathise with those making the superhuman effort of actually walking up the path.

They made the wrong choice, down is easier

A classical meringue dessert and a refreshing beer at the last dining stop gave me enough sugar rush energy to enter the treeline for a final 45 minutes hike down to the cable car station and then on to train Bern and finally, regretfully, the airport.

It was an all too brief stay, with the great value travel pass I could have done so much more.

But sometimes you just have to come back down to earth.

I flew with SWISS