Waking up in Washington DC what’s the first thing to do? I’m staying in the chic but affordable Hotel Madera DC in the DuPont Circle part of the city, a toney neighbourhood that still has streets of fine old houses that are like dowager aunts, a bit faded but clearly have money.

With inverse jet lag fading, I get it worse when flying back, I’m still a bit too woozy to make a long journey to find breakfast, fortunately the hotel has the Firefly Restaurant downstairs, a popular brunch spot for DCers, I’m told. 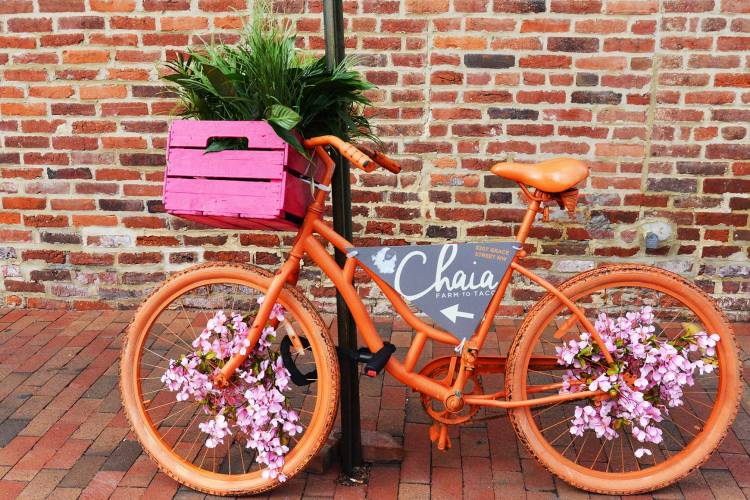 Other modes of transport are available

So even though it’s really more breakfast than brunch time, I get seduced into ordering  a plate of avocado toast, pumpernickel, herbed cream cheese, pickled red onion and wild puffed rice. It’s everything you expect from American breakfast, lots of flavours and lots of it. Luckily I intend walking it off by going to see the White House that’s not too far away.

To The Trump House

The Whitehouse back garden, no trampoline or rusty BBQ here.

The metro system in DC doesn’t really cover much and the buses are a bit confusing. So off on foot to Trump’s place, my first visit. It’s a lot smaller than I expected, I think perhaps I had been confusing it with Capitol Hill. Rather like London’s tourist spots it has pushed back sightseers with anti-terrorist barriers at the front, so I go around back to the lawn side where you can peer in and see the spot where the helicopters land.

You can also see the garden Michelle Obama planted, though without the flattering camera angles of TV news, it looks rather small and forlorn. There seems no sign of the Donald so I do what one does after visiting a famous place, I go to the Gift Shop.

Interestingly the Gift Shop seems more balanced than many Americans when it comes to the subject of Potus. About 75% is pro-Trump merchandise while 25% is satirical about him, if not downright disrespectful. For a monstrous dictator he seems quite happy to allow negative comments about him, even if only on a T Shirt.

It’s a long walk to the other end. Pack a lunch

I move over to the western end of the  National Mall just a short walk away and go to see the Lincoln Memorial. Over my head, planes constantly climb out of Ronald Reagan airport, surprisingly low in the sky this close to America’s political centre. Abe is enormous, even though I knew he would be it’s still a surprise.

170 tons of white marble. He gazes out over the reflecting pool and is a remarkable piece of work. Kings and Emperors have been commemorated with less pomp, but that’s America everything has to be bigger. And that makes me think of lunch.

The Food Truck Scene in Washington DC is semi-legendary. A constantly changing scene that varies all the time with new trucks coming online and others retiring or taking a breather. The sheer number and varying locations could mean some wasted walking,  but fortunately there’s an app for that, showing in real time what trucks are at which spots, as well as a DC Foodtrucks website.

You want claws with that?

The food on offer would send the average London millennial into raptures, all spicy, sticky, sugary, salty, fatty and with world ingredients. I’m keen to avoid the usual Mexican, Korean and Pulled Pork options so track down Feelin’ Crabby’s truck for a Jumbo Lump Crab Sandwich.

Standing in clear sunshine, but with a cold wind blowing down the street, I have to eat fast before getting too cold. It’s a juicy thing, fresh tasting and filling and with that safely down the hatch (nautical reference) it was off to join a food tour.Walking Georgetown

No more trams but the lines remain

DC Food Tours do about eight areas of DC and I chose Georgetown. This is the original part of DC and is where the old money lives, a bit like our Hampstead.

Here politicians of both sides have humble homes that cost a fortune, the classier ones still have little wall plaques that showed they were insured against fire back in the 18th century. If the private fire brigade showed up and didn’t see their company’s plaque, they’d move on and let the place burn down.

It was a good three-hour tour, taking in six or seven places with food and drink in each one and lots of touristy info between destinations, such as the fire insurance bit I just regurgitated.

After a large amount of coffee, tacos and cakes and other assorted treats there is a bit of a danger of more regurgitation, so I head back to the hotel to prepare for the highlight of my visit – Michelin-starred Kinship.

A city that mixes old and new

The Michelin Guide Washington DC 2017, recommends 107 DC restaurants representing 33 cuisines. Nine DC restaurants earned a single star and Kinship in Shaw is one of them. So popular is it that I can only get a table at 5:30, when it opened, an unusual time to have dinner. Finding my UK Uber account worked in DC as well, I am there in no time.

The Shaw District is one of the oldest neighbourhoods in DC and now one of the hippest. The exterior of Kinship gives nothing away, almost invisible as a  restaurant, but inside there’s a book-lined lounge with a fireplace, an intimate bar and a minimalist-chic dining room.  Despite the early hour it’s already fully seated.

The food is, as expected, extremely good but without pretension on the plate. Chef Eric Ziebold and partner Célia Laurent’s restaurant describe their place as a ‘modern American restaurant’ and it’s hard to argue with that, or their desire to have their own cuisine.

The majority of the dishes are divided into five categories: craft (dishes of a technique), history (classics reimagined), ingredients (ingredients), indulgence (wallet busting items) and “for the table” which means sharing dishes like whole fish or a 12-ounce dry-aged rib eye.

Of all the great dishes served, I like the butter-poached Maine lobster on house-made caramelized brioche best. Chef Ziebold spent many years at The French Laundry and this dish is his recollection of dipping bread in the lobster cooking butter at end of service.

Now of course starting dinner at 5:30 meant I find myself back on the street by 8:30. So I walk across, stopping at bars, to nearby ‘Black Broadway’ or U Street. It’s a place steeped in Black American history, a place where segregation was fought against and where music halls saw the first performances by legends such as Cab Calloway, Pearl Bailey, Louis Armstrong, Sarah Vaughan, Billie Holiday and Jelly Roll Morton.

An institution here is Ben’s Chili Bowl at 1213 U Street. Founded by Ben and Virginia Ali in 1958 it saw the race riots out, the massive upheaval of the metro installation, the tough economic times of the 70s and 80s and now is part of the resurgence.

I’m actually a bit peckish again, it’s by now getting on for 11 pm after all, so I go in. Virginia herself comes to say hello, a dapper figure she moves effortlessly through the packed place, the customers parting respectfully to let her through. ‘Busy?’ she answers my question. ‘You should see it in here at 2 am!’

Even President Obama has stopped by one of these

I eat what has to be eaten at Ben’s, the chili half smoke – 1/4lb half pork and beef smoked sausage on a warm steamed bun topped with mustard, onions and spicy homemade chili sauce. The sausage has the crisp snap that only the best ones ever have and the bun is sweet and soft. The chili sauce is hot, but not insanely so and overall you can see why the place is so very popular with all colours and classes.

And I can see why DC is a popular place. It’s not all government buildings and offices as I imagined, but a real living place that has much more to offer the tourist hungry for some great food as well as seeing the heart of the USA’s administration

Thanks to capitalregionusa and also to SkyParkSecure who made leaving my car at Heathrow so easy.