They apparently spent £4 million doing this place up, but Nick feels they really needn’t have bothered as the food sells itself

It’s like when the Met police say it cost them XX million to police a small demonstration, you’d think someone in charge really should ask to see the receipts.

Still, whatever, it’s definitely an opulent space at Farzi Cafe which is in that stretch of Haymarket where both high and low restaurants vie for their share of theatre-goers’ dinner money.

It’s part of the empire of Indian MasterChef judge Zorowar Kalra, who began in India in 2014 and now has around ten Farzi locations there, as well as one in Dubai.

He’s a great Indian proponent of molecular gastronomy (remember that?) but please don’t look away. Here it’s all about playing creatively with Indian food and keeping true to tradition and spices while creating new and exciting dishes. They call it a Modern Spice Bistro and Head Chef here in London is Saurabh Udinia.

The menu is a tad confusing, it has to be said, with seven snacks, about 15 small plates, 25 larger plates and about 12 sides. And there are also Farzi takes on British dishes, such as steak and ale pie with tempered dill leaves and Amritsari-style halibut fish and chips.

Farzi roughly translated means ‘fake’ by the way.On a first visit I’d recommend going at least four handed, so as to get a large selection of dishes to sample, although that aim could be foiled by the fact that nearly all the small plates come with three items.

This means either one person misses out or, as in our case as there were just two of us, a bit of a battle breaks out for the last one. Why do restaurants do that? Is it because two seems too mean, while four is too much?

A very knowledgeable waitress is patient with our questions, although we don’t ask her that particular one, and her recommendations don’t have the usual flavour of upsell, or a demand by chef to push a failing dish, she seems genuinely to like the ones she points out.

A semi-open kitchen is busy bashing out the dishes and so our first ones arrive fairly quickly, although a large table of women monopolise the wait staff to the extent that we have to ask numerous times to get our water, while our wine is still not served by the time the plates have hit the table.

Still, the Dhal arancini with rolled poppadoms, a take on the Italian version, with rice and lentils wrapped in crushed poppadoms then deep fried, are good enough to calm us down. An onion tomato salsa and mango pickle aioli served with them is mildly spicy and just right.

Naga Pork mizo beans and bamboo shoots is fall apart tender and any worries I had that naga might mean ‘mind-bendingly hot’ were unnecessary. Here the fearsome chilli has been shorn of its full fire, although it’s a bit lively still, but more importantly its sweet smokey flavour has been allowed to shine.

An example of the restaurant’s willingness to take risks comes with Tuna Ceviche Bengal Jhal moorie. The sashimi/ceviche grade tuna is thinly sliced and that ‘cooking’ from the acids enough to remove the rawness but not the texture.

Jhal Moorie is puffed rice salad and here the grains have black stripes, which make them look rather disconcertingly like grubs, but that visual hiccup aside, the crunchy puffiness is a perfect foil to that butter soft fish. 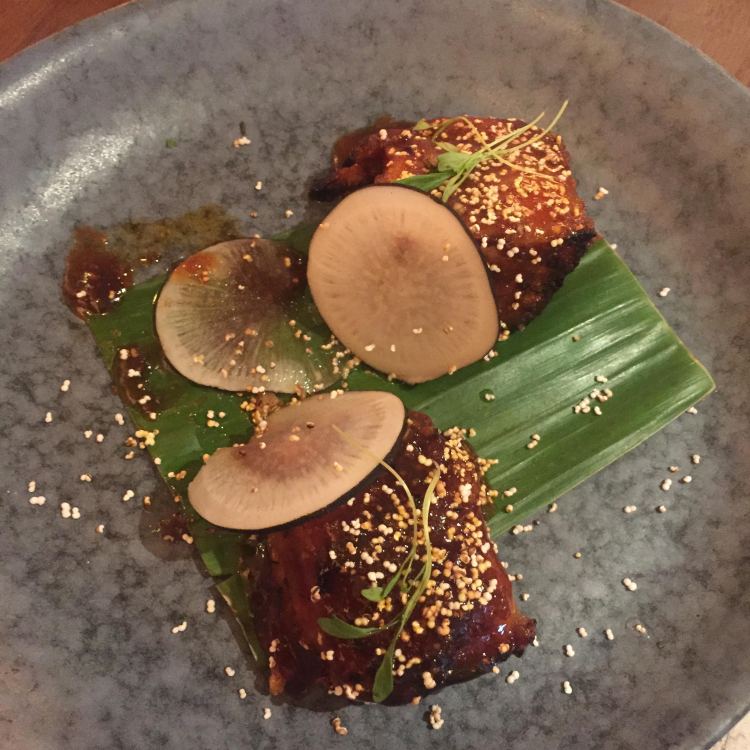 I’m less impressed with,but still enjoy, Madras Pepper Prawns aerated thayir sadam, the latter being a curd rice that has been aerated (it is not wise to use the word ‘foam’ these days). As I say prawns are a bit too soft for my taste, but the spicing is sure-footed and the slight sourness of the rice worked well too.

Portions are generous overall and the dishes not expensive despite that £4 million outlay, so we feel encouraged to head on further into the menu and get us some Herb Crusted Paneer Tikka san Marzano makhni.

I like paneer, although many people don’t, as it soaks up flavours so well and has a good texture. The fresh tomato sauce, poured at the table is light and fluffy and properly redolent of tomatoes and not water.

With it come some flatbreads that had been over toasted, so they snap and don’t fold. They tast fine but are too crispy.

S likes his Pork Belly Tikka with murabba glaze and, after a forkful or two, so do I. Murabba glaze is a sweet preserve which is wonderfully sticky and makes the tender pork extra good, adding to the flavours of tikka without competing. With it we have simple boiled rice and a fluffy nan to help pad it out.

We’re pleasantly full, still able to contemplate heading back to the office and not the nearest couch, but a dessert has to be done. S is truly done for and can’t eat a thing, even though the super-short dessert menu is intriguing, 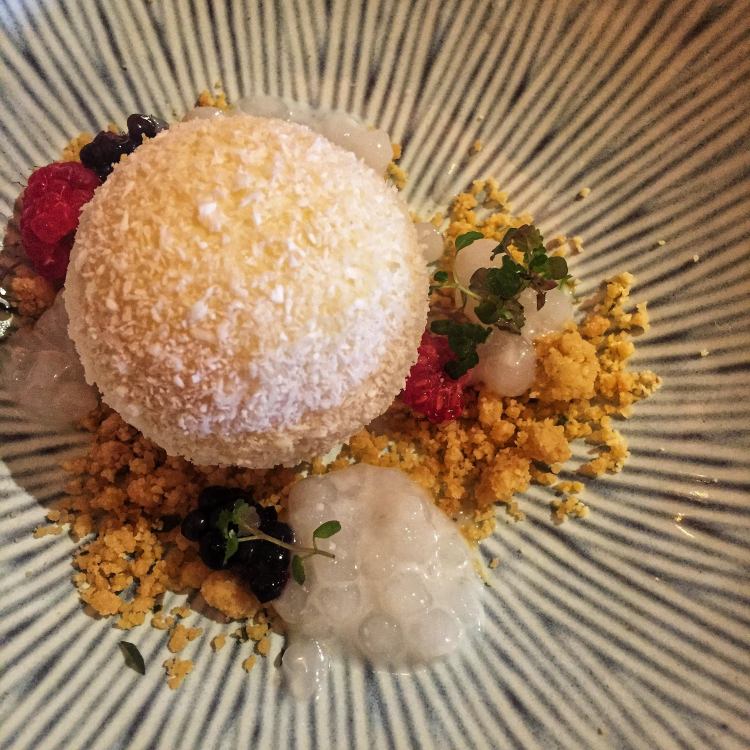 My choice, Laddoo – shell, coconut mousse, berries – comes on a plate that does a Bridget Riley on my eyes.

Cracking the snow-white shell, all the fun of breaking an Easter egg, reveals a gloriously soft and gooey interior. Laddoos (or Laddus) are a popular dessert in India, but this has been elevated to a sophisticated level whilst retaining a down-to-earth playfulness.

An excellent finale to what’s been a very different kind of ‘Indian’. Obviously, the space is a cut above average, but the prices not so much higher.

Best of all is the sheer novelty of the dishes, their ability to mix and match and yet still be true to their roots.

£4 million is a lot of wedge to blow on a restaurant, but the real money shot is the excellent food the kitchen is turning out.

This review appears on www.foodepedia.co.uk