‘Who ate all the pies?’ Actually, it’s more a case of who ate the crab pannacotta and then the sea bass with salsify?  Nick finds his first football match to be a surprisingly tasty experience. 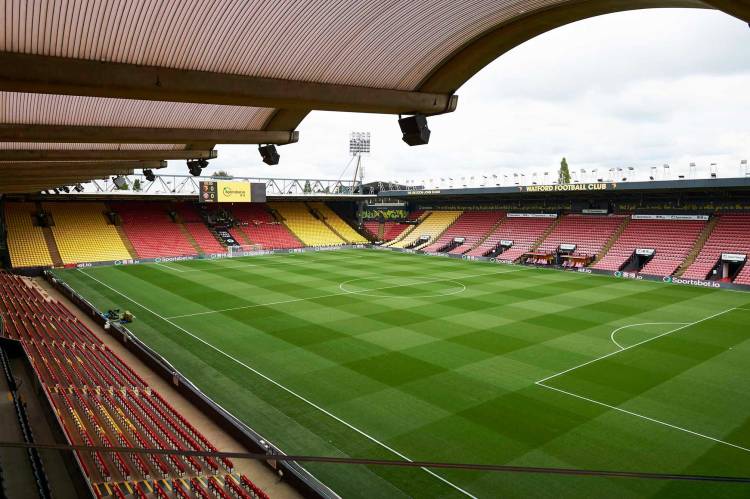 I have a confession to make; although I am an old geezer I have never been to a football match in my life. Until last Saturday.

My father was not remotely interested in football and my school played rugby. Ok, yah?  So, I was never going to be a football fan.

Plus, back in my teenage years, football was at its lowest point; mindless violence, both in and out of the stadiums, standing up in the cold for the whole ninety minutes and food that was barely worthy of the name. It really never appealed to me. 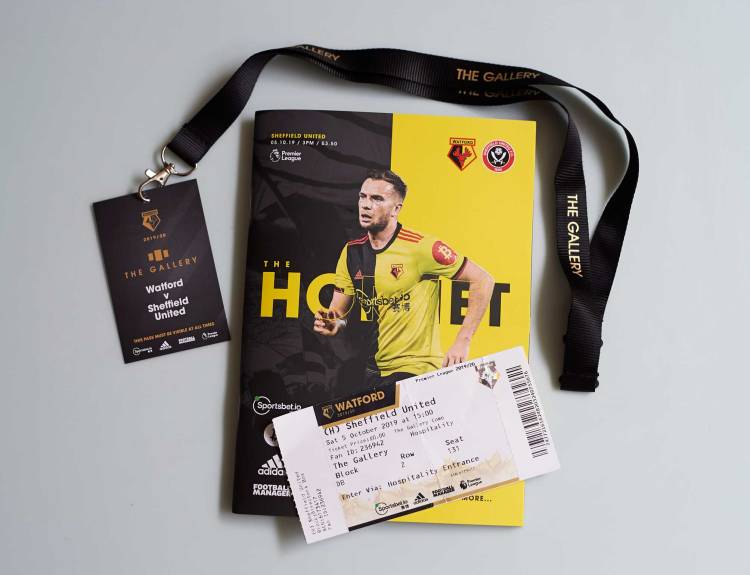 But, Watford FC’s, Hornets Hospitality, has  recently been awarded the highest accolade in Premier League hospitality.

VisitFootball, a teaming of the Premier League and the national tourism board, VisitEngland, and therefore completely independent, recently announced the Watford FC matchday offering as the best in football and crowned them ‘top of the league,’ beating off stiff competition from other key clubs.

So obviously I had to go try out their food and hospitality package, and of course to watch a match too.

I grabbed our resident footy expert, and photographer, Al and got on the train north.

Watford V Sheffield. It would be an interesting match, or so Al told me on the journey as he schooled me in appropriate things to shout. ‘More urgency, Watford!’ he reckoned was a good generalisation that would make me sound knowledgeable, if I didn’t overdo it. 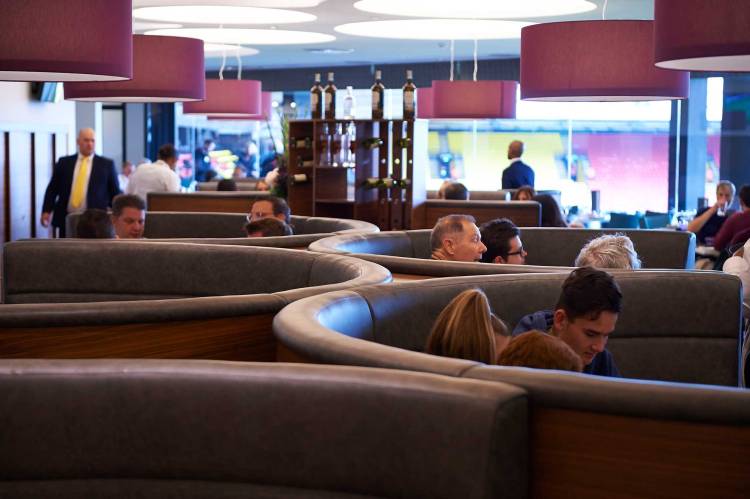 When you’re booked into The Gallery restaurant at Watford FC, as we were, you go in a swanky door at the back of the modern stadium and are soon armed with your laminated pass and a programme.

Up some stairs, past a lot of smiling well-groomed staff, and on to the top floor, where all the ritzy executive boxes are located, you find The Gallery.

It’s an absolutely show-stopping start. From a nondescript corridor, you walk into a gorgeous room bathed in light from massive, seamless, floor to ceiling windows that look down onto a pitch that’s almost glowing green.

The room is opulently done, lots of soft linen and gentle colours. If it weren’t for the view of the pitch you’d think you were in any fine dining restaurant in London.

A clue that you aren’t is that a lot of people are having pints of lager, or Watford’s own Hornet Bitter. Beer, it seems, is still football’s favourite drink, even in the posh seats.

Everyone is dressed very smartly, there is a house rule of No Team Colours, but in any case, these customers are not the sort to wear football scarves. Unless made by Armani perhaps, or Hugo Boss.

As kick-off is at 3pm we’ve arrived at 12:30 to enjoy a leisurely lunch. The menu is good for choice for all and has vegetarian options, too.

Armed with a pint of that bitter, I try the crab panna cotta with sea fennel, soya and mirin gel and a sesame cracker starter.This is all very modern and looks good and tastes very good.

The cracker is crisp and the soya and mirin gel are usefully dotted about the plate, I would have liked a bit more of that gel, actually. The only thing a bit disappointing is the temperature; it’s all fridge cold. 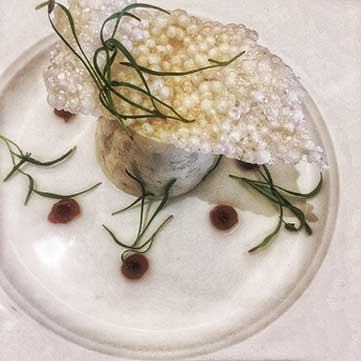 I have nothing against things being made in advance, but this mutes some of the flavours. Ten minutes out of the fridge before service would have worked wonders.

Much the same can be said of Al’s guinea fowl and golden raisin ballotine with beetroot relish. A very well put together dish, meaty, rich and tasty, that only gets a penalty (see what I did there?) by also being a bit too cold.

It’s a game of three halves though, so after a good start, with plenty of off the ball action, it’s on to the next course.Al’s having lamb rump with parmesan gnocchi, olives, tomatoes, green beans and a lamb jus.

The lamb is large and properly pink, the full-flavoured jus well reduced to just above sticky. His post-match verdict – ‘very nice overall, full marks to the gnocchi, but I could have done with a few more of them, or some spuds, to bulk it up a bit’.

I have the pan-fried sea bass with celeriac puree, chicory, roast salsify and jus. This is very well done; elegantly plated, the fish has proper crispy skin and it has been handled with care.

Celeriac is one of my favourite root vegetables, cruelly underused in the UK, the chicory provides a welcome note of bitterness, while the salsify delivers the pseudo-oyster flavours it’s known for.

I would have liked a green vegetable, but otherwise this dish is definitely in the back of the net.

Finally, as the kick off whistle is about to blow, I put away an actual pie; although a posh one. It’s called a pithivier; two discs of puff pastry enclosing apple and blackberry. 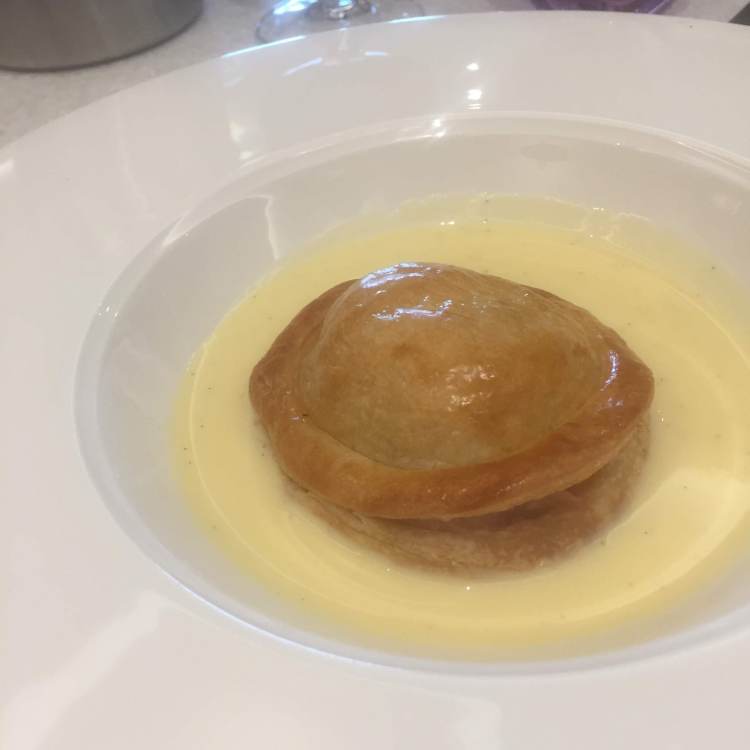 This comes with an excellent vanilla anglaise, which is French for custard. Although this is much nicer than any custard and nose-twitchingly aromatic with vanilla. Goal!

With that we’re shown to our reserved seats on the terrace, bang on the halfway line and very comfy. Here we watch the match in the kind of benign haze you get when you’ve just had a good meal, a pint of bitter and half a bottle of house red each.

Incidentally, if you don’t fancy going outside, or want to finish your drinks, the room is darkened for the match and you can watch on any of the large screens dotted about.

We come back out of the autumnal air at half time to eat tasty sliders served at our table back in the restaurant, and we grab another pint before checking out the other food outlets on offer. 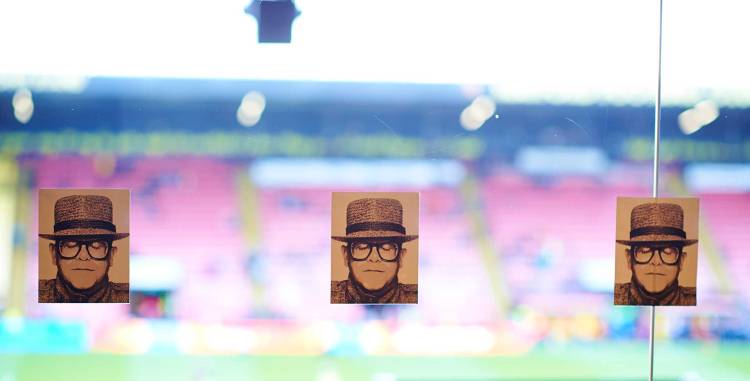 There are a lot to choose from. The View is one floor below and is a more casual restaurant but still up market, and below that is the Sir Elton John Suite with plenty of pictures of the man himself and a very jolly atmosphere.

Horizons restaurant is the nearest thing to fast food, but better than that with a menu that inventively straddles lots of countries and street cuisines. It’s all very impressive. 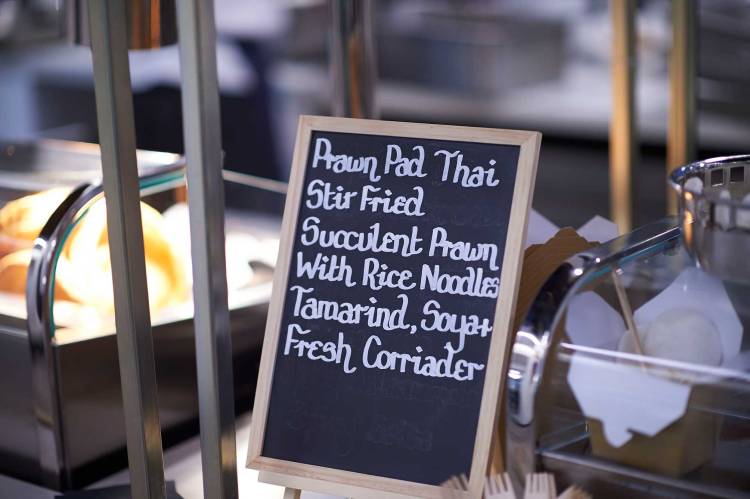 Overall as we go back to our seats I feel that the stadium reminds me, in a good way, of a cruise liner – plenty of food at literally different levels and with lots of choice all done to a high standard.

After full time, we go back for the post-match debate at our table, with lots of cheese and biscuits to enliven the conversation.

There’s no hustling us out and it’s a good way to kill some time to avoid the crowds heading to the station.

Verdict? The boys in the kitchen done good and it was a real result.

If you’re a footy fan, or just fancy an unusual Saturday, then the hospitality packages at Watford FC are well worth checking out. Find out more at hospitality.watfordfc.com