Sweet Bordeaux is reaching out to a new, less formal, drinker and showing off its multiple expressions. Nick meets the winemakers that can pair the wine with more than just pudding.

He flips out the contents of his glass and it falls like rain down through the leaves of the tree and onto the ground. ‘Pas de probleme,’ is Au Fil du Ciron climber Vincent Galle’s response as he swings off in search of a fresh bottle. 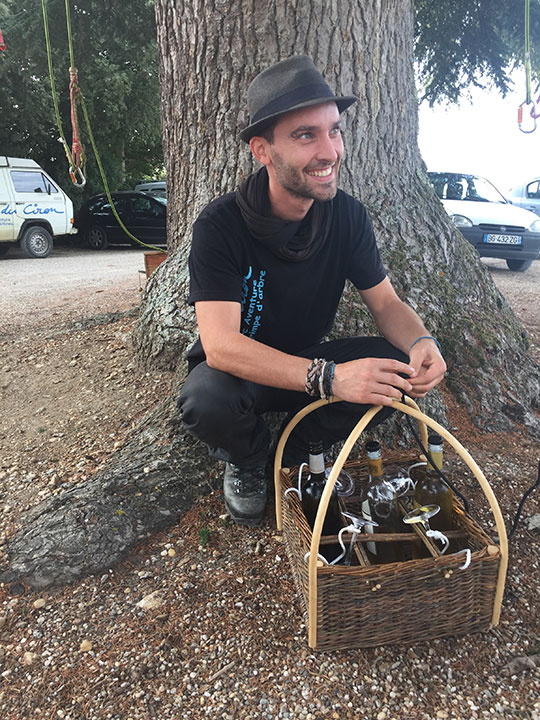 The recoil of his move makes the suspended platform we’re sitting around pirouette wildly and we hang on tight hoping our harness ropes hold. It’s about a hundred feet straight down and we don’t to end our wine tasting by getting out of our tree the wrong way.

It’s not normal of course to have a wine tasting at the top of an ancient pine, having first climbed hand over hand up a rope to get there, but for Château Rayne Vignaud a sweet wine maker here in south west France, doing things differently is the new sweet Bordeaux way. END_OF_DOCUMENT_TOKEN_TO_BE_REPLACED

The bids are coming in thick and fast and the French auctioneer is sweeping his fringe out of his eyes with one hand and waving his gavel about with the other as he struggles to keep up. A thousand euros bid soon becomes two thousand and then ‘best of order’ has to be asked for as it hits €3000 and the crowd gasps Gallicly in astonishment.

At €3200 the hammer finally comes down and Didier Vinazza, a man who rather resembles Father Dougal in a Gascon beret is surrounded by congratulations. He’s just sold a quarter barrel of his best Pacherenc for the equivalent of over €50 a bottle. More in fact, when you consider the American buyer now has to pay the commission, the bottling, labelling and the shipping costs on top. An expensive sixty bottles of wine but definitely worth it for such nectar and the money that’s been raised will be going to good works around the area. ‘I took a risk harvesting in late November but I knew my pebbly clay terroir would be good for the Petit Manseng grapes and they were exceptional,’ he says above the din. END_OF_DOCUMENT_TOKEN_TO_BE_REPLACED

The region’s wines are well known, the region less so. Nick Harman attends the yearly festival of art, culture food and wine in Minervois, Languedoc-Roussillon.

Red suitcases stand silently on stone islands by the banks of the River Cesse, one of the two rivers whose deep gorges have defended the picture-perfect village of Minerve through the ages. It’s been captured only once, in 1210, when Simon De Montfort’s army smashed the drinking well with massive stone catapults, the largest wryly named ‘bad neighbour’. Forced to choose death by dehydration or to surrender, the inhabitants chose the latter and 140 Cathar refugees, ‘the Perfects’ who refused to give up their faith, were then put to death on the Pope’s orders.

The suitcases symbolise flight and extermination and are just some of the otherwise cheerful installations created by local sculptors for Les Grands Chemins en Minervois, an annual festival in the region. Each chemin, or ‘path’, takes art, food or wine as its theme and guides the visitor through the richness of the area and of its artists, whether they work with a corkscrew, a paintbrush or a frying pan. END_OF_DOCUMENT_TOKEN_TO_BE_REPLACED