‘Dredging for scallops is like trying to pick up your wallet on the fast lane of the M25, in the fog.’ Nick Harman meets the Rye ‘scallopers’ just ahead of Scallop Week

It’s all a bit quiet down on Simmonds Quay in Rye, East Sussex. The scallop boats are moored tight and the fishermen are in their huts. The stormy weather that hasn’t ceased battering England for weeks is once again stopping them from going to sea.

‘We haven’t been out more than a couple of times since Christmas,’ sighs one fisherman sadly. At this time of year scallops are an important harvest, but the boats are small, under 10m long, and crewed by just two men. The big seas would be too much. 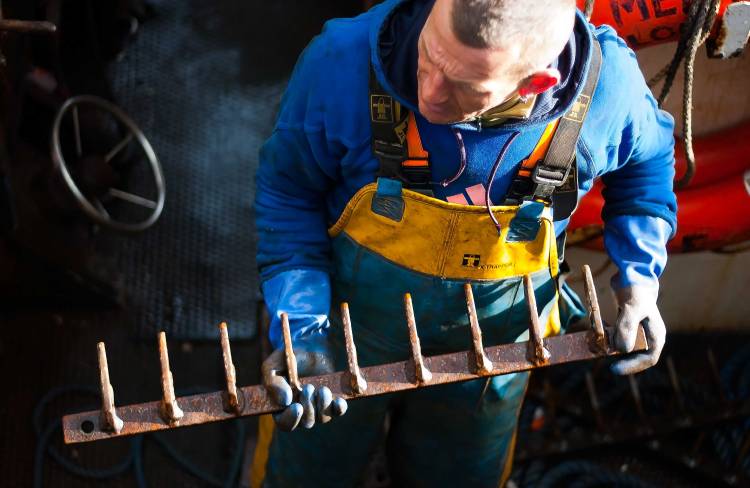 On another boat ‘Geordie’ is taking the opportunity to overhaul his scalloping gear. As soon as he speaks you can hear how he got his nickname, it’s an accent undiluted by his years on the south coast. He shows me his dredging kit; toothed combs that rake the sea bottom and tumble the scallops into a catching net behind.

Sprung to help them jump over the heavier, larger rocks, the teeth still eventually get ground down and need replacing. ‘We use the worn down ones to dredge through sand,’ explains Geordie, as another massive squall sets his ship rocking even at its mooring. ‘We won’t be going out for at least a few days though,’ he says, looking balefully at the blackening sky as I scuttle back to the warmth of the car and the company of Oliver Campion one of the organisers of Rye Scallop Week. 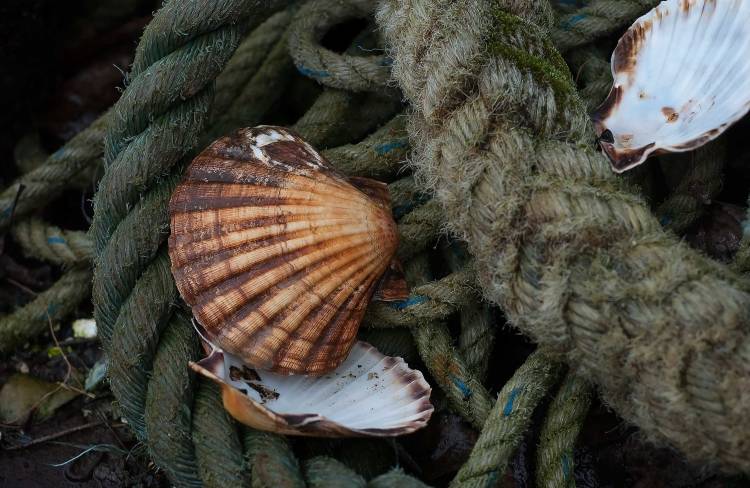 ‘Scallops are always big business in Rye at this time of year,’ Oliver explains as we drive on ‘and the biggest event of the short season is Rye Scallop week in February’. This is when the scallops are at their peak, plump and extra tasty, and hordes of gourmets, as well as people who just want to have fun, descend to take part in scallop themed events, visit the old town, and of course eat lots of scallops prepared in all kinds of ways by the town’s many chefs.

It’s an ancient harvest for an ancient place. Today Rye is almost two miles from the open sea but it was once a busy port with fishing, shipbuilding and plenty of smuggling. Storms and silting up, along with the reclaiming of land for agriculture, did for Rye’s as a deep water port a long time ago, but Rye Harbour still functions and the small fishing fleet still makes a living. 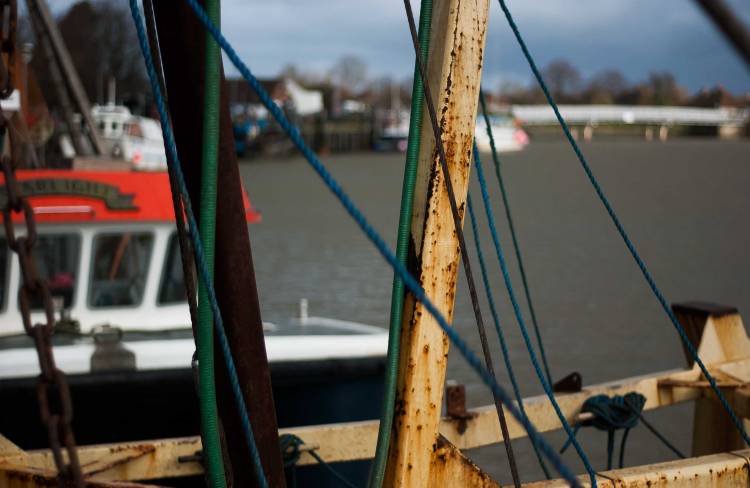 Dredging is the method the day boats use and local scallop ‘cutter’ John Botterell defends it against criticism. ‘Yes dredging tumbles about the rocks down there,’ he explains sitting in his office, a cramped hut a few hundred yards from Rye Harbour’s waterfront, ‘but so do storms and in any case we have a strictly limited season. Our two-man day boats are tiny, compared to the dredger boats out of Brixham or Scotland, and they’re not bringing in the same vast quantities. They go out in the morning and if lucky come back in the evening with eight or twenty sacks, and a sack is around 10 to 12 dozen scallops, depending on their size’. 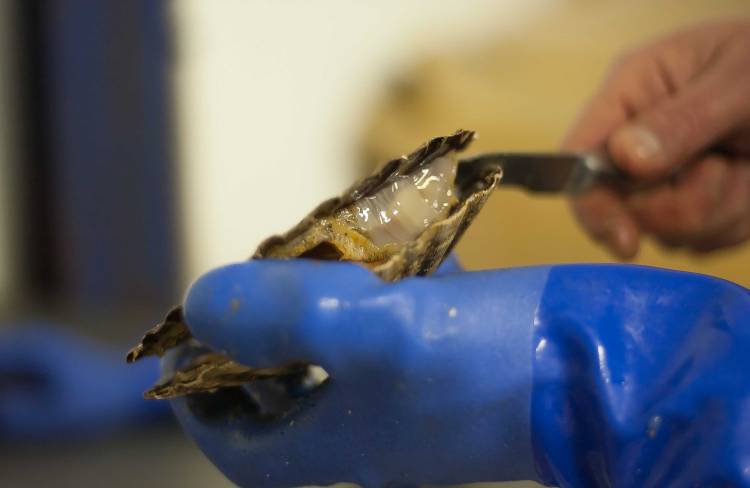 As an ex commercial diver himself he says that hand diving, beloved of restaurant menus, is a non-starter for Rye. ‘The scallop beds here are tidal, in the shipping lanes and down to 100 to 150 meters,’ he points out, ‘and at that depth you can barely see your hand in front of your face even with powerful lights, so you’d never harvest enough scallops to enable everyone to be able to afford them.”

It is, he makes clear, not a nasty commercial process, just a natural harvest that has been going on for hundreds of years. It’s not easy money out there in the busy channel either, hence John’s reference to the M25. 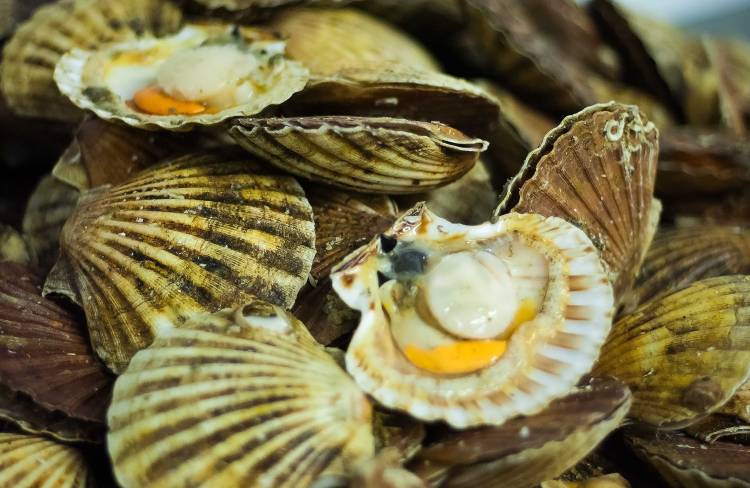 Rye is packed with restaurants each gearing up for the coming Scallop Week 15th to the 23rd February. That evening I climbed the steep incline of Mermaid Street, its cobbles the size of bread rolls and offering a twisted ankle at every step, to the Mermaid Inn the oldest tavern in the town dating back to 1420. 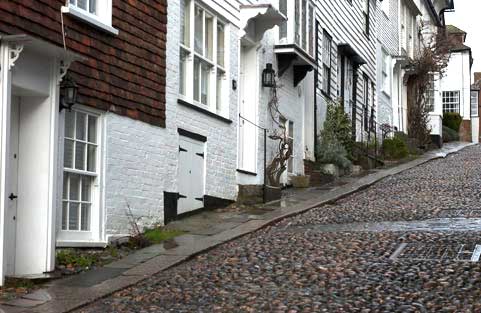 Wet through, hair askew from the cold wind and gasping from the effort of the ascent I couldn’t have been happier to stumble into a place full of nooks and crannies and with a roaring fire in the grate.

Descending the street was harder later following dishes by chef Kyle Tatner from his Scallop Tasting menu. These included pan roasted Rye Bay scallops, Rosette de Lyon sausage, wild herb salad and light mint and honey dressing for starters, and a main of roast rack of local Romney Marsh lamb, slow cooked fondant potato, celeriac puree and sautéed Rye Bay scallops for mains. These were without doubt some of the best scallops I’ve eaten anywhere and all cooked to perfection, in other words barely cooked at all just coloured and caramelised. 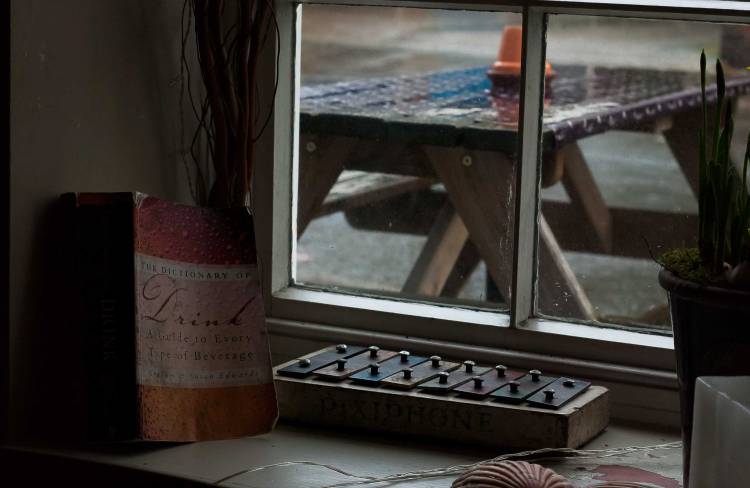 My idiosyncratic room for the night down at The Ship Inn, itself built in 1592, was warm and cosy and even though I dropped a pound coin through a gap in the floorboards and spent a good ten wine-fuddled minutes trying to fish it out, I was happy and snug listening to the wind battering at the windows. I was happier still at breakfast, a full Sussex with great bread from local artisan bakers, The Lighthouse Bakery, local sausages, bacon and eggs and Theo Bekker for company. Originally from South Africa via London and, now together with partner Karen, owner of the Ship, he’s one of the main movers and shakers of scallop week. 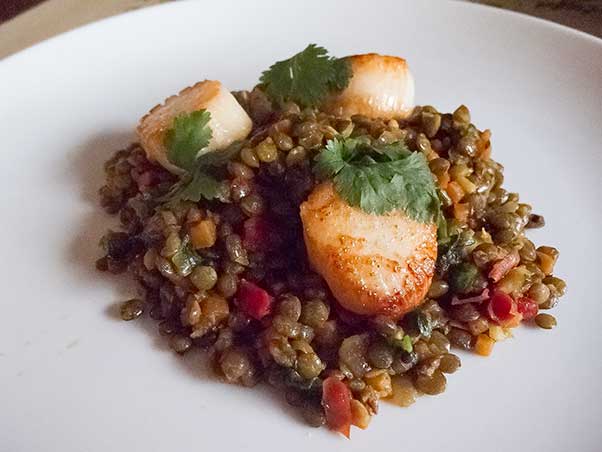 ‘All the venues come up with ideas to celebrate the scallop,’ he tells me as I shovel in sausage, ‘from fun runs with wheelbarrows full of shells to creative menus of scallops.’ The Ship’s own menu will feature dishes from their new chef, including a scallop ceviche that’s part of ‘Scallops of the World Unite’, a meal of six scallop dishes matched with wine that includes a dish of roasted scallops on lentils and a fish soup featuring scallops. I tried all three a little later, after my breakfast had gone down a bit, and each was worthy of any top London fine dining restaurant. 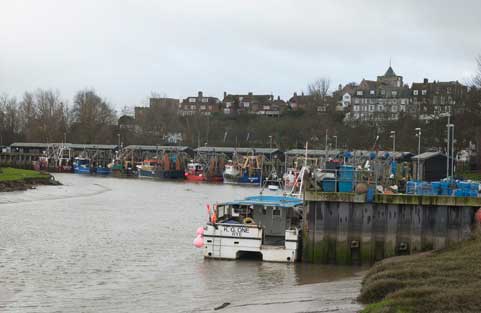 ‘There’ll be plenty of scallops for every pocket,’ Theo assures me cheerfully as I leave. ‘ We’re serving Coquille St Jacques at the bar in the shell with creamy mash, Gruyere and spinach, just pull up a stool anytime all week and tuck in.’ 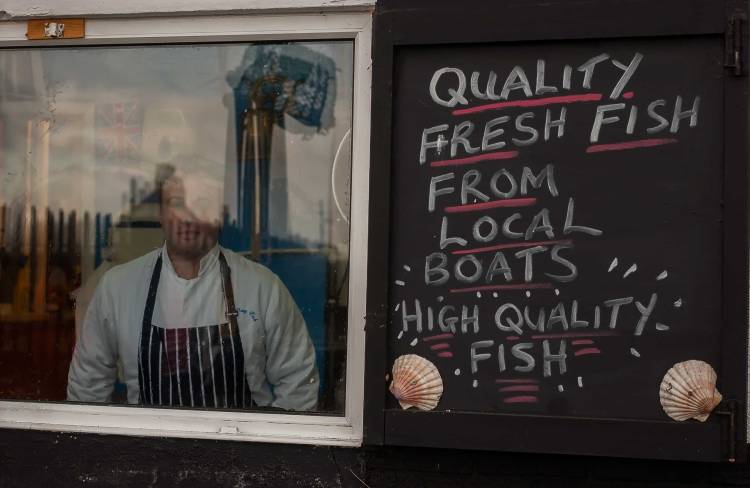 Passing over the little bridge out of Rye I pulled into Rye Bay Fish and bought myself a small bag of scallops to take home and cook for supper that evening. If you can’t get enough of scallops either, then Rye Scallop Week is definitely one to put in your diary. 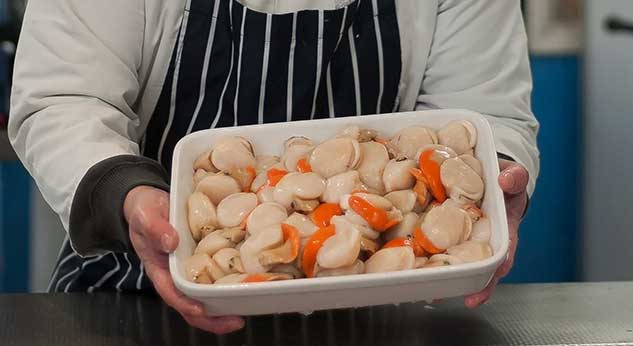 Rye Scallop Week runs from 15th to the 23rd February. Over fifteen pubs and restaurants will be running special scallop menus

Scallops of the World Unite tickets £60 pp can be bought from the Ship Inn website. Alternatively  £200 for the evening event, overnight stay and breakfast for 2.

All Scallop Week information can be found at scallop.org.uk