I must be getting old, the first thing that hits me on entering Fraq is the noise; I can barely hear what the girl in charge of opening the door is saying to me. It isn’t so much the people making noise as the music, it’s club-loud. This may be a good idea in the evening when the majority of customers will probably be under 25 and on their way somewhere exciting, but at lunch it has us having second thoughts straightaway.

But undaunted we  push through a crowd of young men in beards, and young girls in those still popular ‘cute’ bobble hats, to a table somewhat larger than a napkin, We’d ordered at the cooking counter, it wasn’t a  difficult moment; Maine Lobster Roll or Calamari Club?  Fries and/or fried courgette strips?  A craft bottle beer? 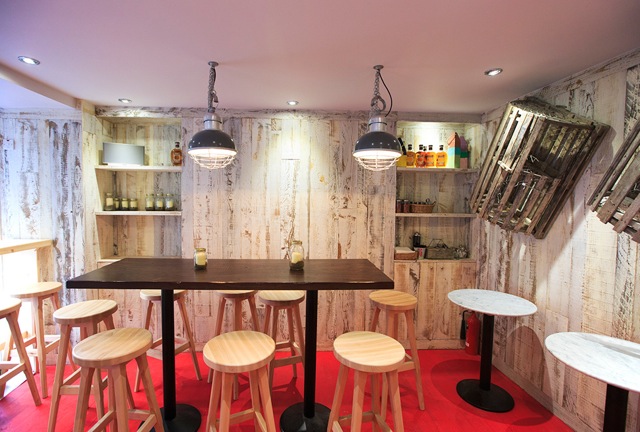 The food comes out fairly smartly, nicely presented with the chips in a mini fry basket and the Calamari Club wrapped as if for takeaway. Knives and forks are included, but of course the real appeal of this food is the hands-on aspect, it’s a trend that won’t go away, the messier the eat the more it is ‘BLOODY AMAYZING!!!’. Or so I have observed.

The roll is pretty good, not stingy on the lobster which is a bit bouncy but sweet. It’s a sweet roll as well though, which again is on trend but don’t get the point of sweet on sweet. Celery and lettuce are in there and it was supposed to come ‘slathered in lemony mayo, tartare and Marie Rose sauce’, but if so the definition of slathered is ‘a small squirt’ – I’d have liked a lot more tart dressing to liven up the lobster. It rather needed it.

K has the Calamari Club, which is the fin crumbed and fried and put into a bun with lots of tartare sauce, and moans about the state he gets himself and his clothes into, I explain to him about how he is missing the point of this kind of food, he calls me a cruel name but says apart from the mess he quite enjoyed it. Both meals are gone in moments. The fries are excellent. To finish there is a choice of Warm Chocolate Cake or Lemon Sorbet, Vodka and Fizz, but with our heads pounded by, what I am told is East Coast Old Skool Hip- Hop, we decide to hop it to the pub.

It’s not cheap, considering the target market and how fast the experience is over, but London is like Pavlov’s dog when someone mentions lobster right now – the drool is like a tsunami. Certainly Fraq has done its homework and designed decor and menu to hit the spot for a cool crowd.

Then you’ll want to eat at these then…