‘There’s no sign outside,’ my informant told me over a beer in the Ramblas, ‘and you’ll think that there simply can’t be anywhere good to eat in that tourist area, but honestly, it’s the bomb.’

Which is a bit of an in joke because the restaurant is known, by those in the know, as ‘La Bomba’ because of one particular tapas it serves that is loved by all who go to this tiny place hidden in the backstreets of Barcoloneta, the port part of Barcelona.

Outside the La Cova Fumada (“The Smoked Cave”)  it looks as  rough as heck; a door to get behind the bar and one for the customers and nothing to suggest it’s a tapas place and not simply a store for the more obvious restaurants that flank it. Iron-grilled ancient windows seem to serve only as areas to stack crates and not to look through. 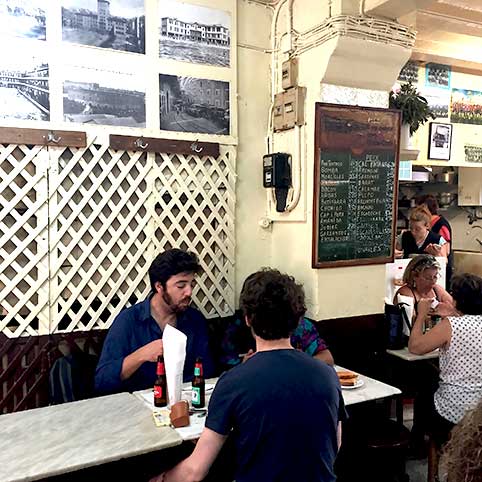 Inside it’s basic, not designer basic but ‘that’ll do basic’ or ‘authentico’ as you might say if you write for The Observer. No expense has been spent and nothing seems to have changed since it opened in 1944.

A few cheap tables to share, which if you arrive around 12:30 lunchtime you may get to sit at, and the boss, a remarkably thin man who keeps a permanent cigarette smouldering on a windowsill outside, will propel you to once he has satisfied himself you aren’t just after a drink.

He is suspicious of foreigners who are pushing out his regulars, they may not be after the kind of food he sells or worse they could be food tourists. He scowls at cameras bigger than a mobile phone.

He is impatient, telling me in basic English to sit closer to my unknown neighbour as my legs are blocking the path of his scurrying waiters. The menu is on a blackboard, it’s in Spanish, I can’t speak Spanish but I do know my menu items so it’s okay.

My immediate neighbour helps out anyway, he does speak Spanish but is in fact an Israeli Professor of Economics from Tel Aviv and he and his wife always come here as, he tells me through a mouthful of chickpeas, ‘it’s one of the best in town’.

So we order bombas and some sardines and some butifarra sausage with beans and some squid and some pa amb tomàquet (bread rubbed with oil and tomato). Wine comes in small glasses from a dispenser behind the bar, gravity fed from a large tank up near the ceiling. It’s not what you’d call Premier Cru, probably Dernier Cru.

The kitchen is the other side of the room, a hole in the wall where the sound of frying can be heard and from where come aromas to waken the deadest of appetites.

When it arrives La Bomba is in fact a mashed potato ball, bread crumbed and deep-fried, stuffed here with carrot and flavoured with garlic and onion. On top are a tomato sauce and some aioli. Bombas feature all over Barcelona, it’s often claimed to be the town’s signature tapas and it’s said it originated here with the owner’s grandmother.

They are delicious and we chase them down with gulps of the wine and then attack a plate of tiny sardines grilled and then dressed in oil and parsley. They are of course fresh as can be and dealing with all the tiny bones is worth the effort.

The butifarra sausage comes chunked and adrift in a sea of beans clearly cooked from soaked, as the texture of the exterior is fluffy not slimy like tinned ones always tend to be. These taste of beans and that’s not a criticism.

My Israeli professor couple have been replaced by a middle-aged pair from Copenhagen, they speak a little English and show me a much-folded cutting from their local paper recommending this place. The waiter pulls out his mobile phone and takes a snap of it for his archive and we order squid before he gets a chance to run off. 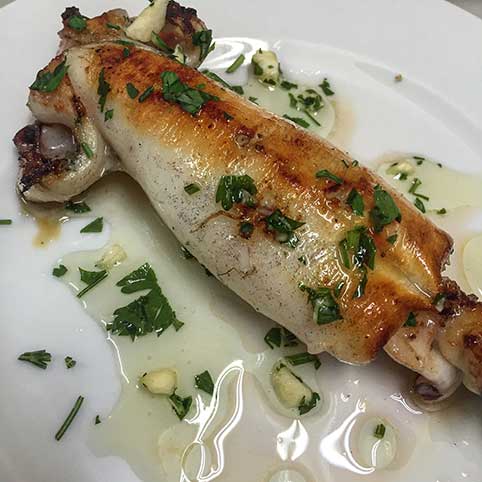 This is the best thing yet, a small squid cleaned then reassembled then slapped on the red-hot plancha until it’s golden and butter-soft then splashed with oil and parsley before being whisked over to us. I love it immensely.

Outside the queue is building, although as it’s Spain it’s not so much a queue as a milling mob, so we neck super strong espressos and get out to give someone else a chance. The bill is €25, cash please.

I wish I’d eaten more things, I wish I was back there now. Ah well, there’s always next time and while I appreciate the irony of my saying this, I hope it hasn’t become even more well known by then.