Today’s cruisers attach massive importance to the quality and variety of food on board. Nick Harman sees what Holland America’s newest ship has on the menu. 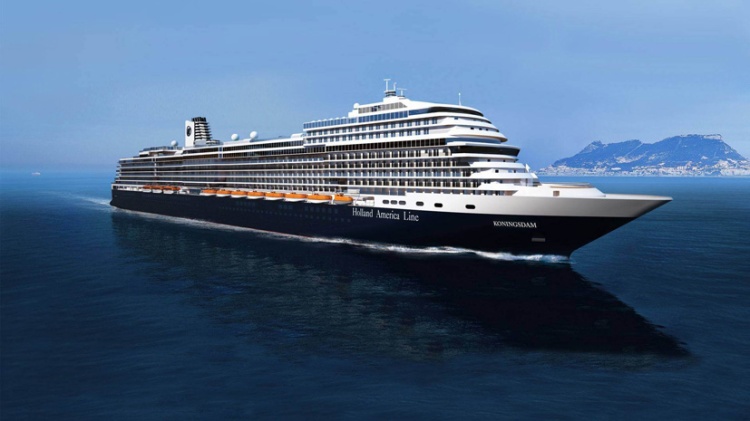 Holland America is one of the most venerable of cruise lines, but perhaps not the best known in the UK. Founded in 1873 for many years it ran regular passenger sailings from Holland to New York.

In fact when Rotterdam was the gateway to a new and better life for European emigrants in the early part of the last century, it was mostly on Holland America ships that they sailed.

I was invited to Rotterdam to sail and eat on the ms Koningsdam, the newest addition to the Holland America Pinnacle-class cruising fleet, and the largest as well. It was about to be dedicated by Queen Maxima of the Netherlands before we sailed to Amsterdam overnight.

All aboard for ‘free’ food 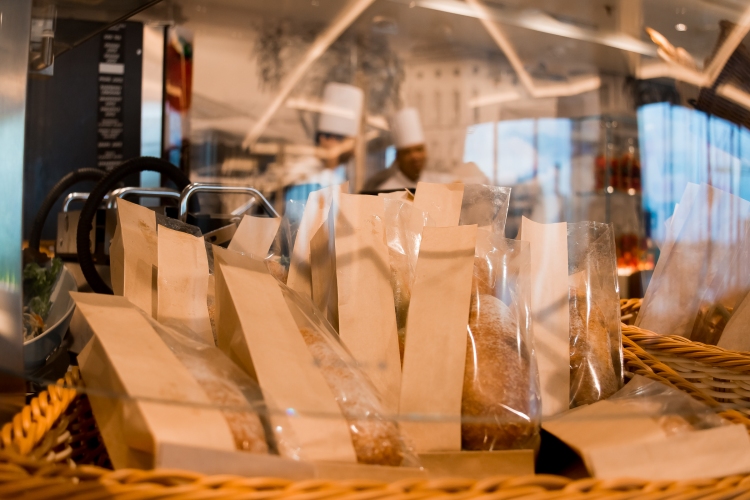 If you’ve never been on a cruise, or haven’t been for a while, you may well have a somewhat jaundiced view of the whole business food-wise but you’d be surprised.

There is of course on a ship like this the usual self-serve food court, the all-you-can-pile-onto-your-plate-and-stagger-back-to-your-table-with deal included in the cruise ticket.

Here it’s called the Lido Market, and it’s very good actually with a massive choice of world cuisines to grab and go or have cooked to order. Enough choice to keep you happy for weeks, but there’s a lot more to savour on board.

On the casual dining side there is the New York Deli And Pizza, which is open all day.  My pizza’s base here was well done, but the toppings suffered a little bit from processed meats. There’s also a handy bar by the pool called Dive-In where a constant flow of juicy hot dogs and burgers come out and it is, like most of the casual eateries included in the cruise cost.

Also included is the more formal two-floored rather grand dining room, The Dining Room, called that so that no one mistakes it for the laundry presumably. Here you can get breakfast, lunch and dinner served at your table and choose whether to arrange pre-set seating and dining time or to arrive as a walk-in. 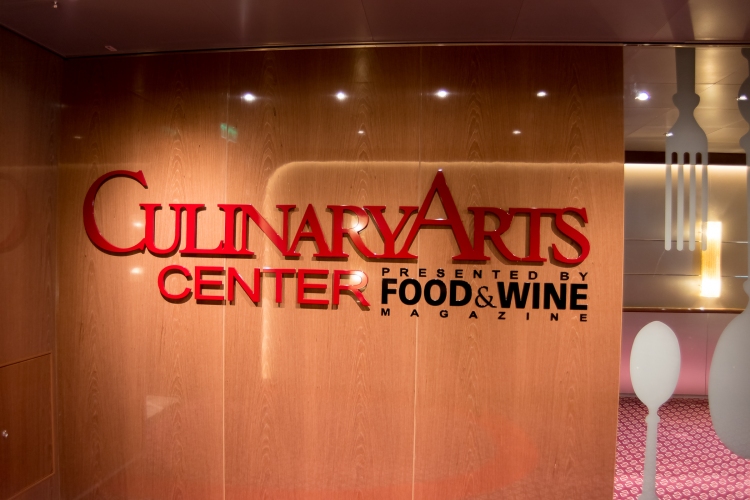 Italian tastes get to be met by Canaletto and if you’re keen to learn some cooking skills then the unique Culinary Arts Centre presented by Food & Wine magazine is a show kitchen with individual cooking stations for demonstrations and hands-on classes by visiting celebrity chefs as well as the ship’s own experts.

In the evening, this modern, airy room becomes a farm-to-table experience with ingredients harvested from a remarkable glass-enclosed growing area just off the kitchen. 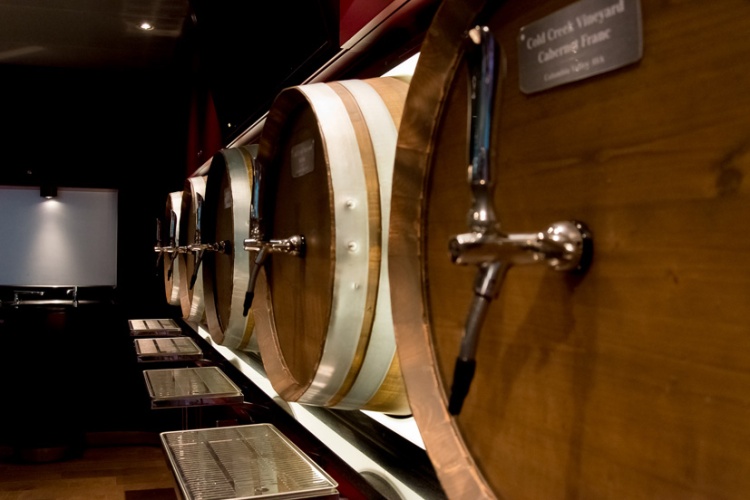 Next to it is BLEND created in collaboration with Chateau Ste. Michelle, Washington State’s oldest winery. It’s the only purpose-built wine-blending venue at sea, with a tasting table for 10 guests who can create their own particular blend from a selection of five barrels of single-vineyard red wine.

The modern cruise ship is big and Koningsdam,while not one of those floating cities at sea, is still big enough to have lots of ‘fine dining’ restaurants of intimate size and classier food. 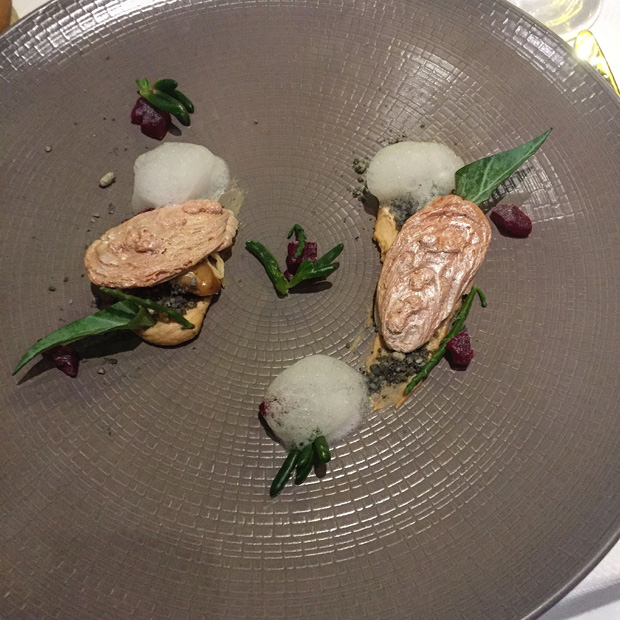 There are five on board, all under the creative direction of The Culinary Council a team of five world-class chefs. The first night I ate at the Pinnacle Grill, a restaurant usually celebrating the best of America’s Pacific Northwest, but this night it hosted Culinary Council’s, three-Michelin star Dutch chef Jonnie Boer who will regularly bring his De Librije restaurant to sea as a once per cruise ‘pop up’.

For a US$69 dollar surcharge guests get a five-course menu with wine pairings and it is, as is to be expected, very good indeed. Stand out dishes include Oysters on the Beach, with ‘fake’ oysters made from foie gras and Farmer Pigeon, a perfectly cooked breast plated with hazelnut, kohlrabi and star anise. Elegant unusual food and brilliant wines too and a bargain at the price.

I also tried the Asian style food in Tamarind, which Condé Nast Traveler singled out for “cuisine that rivals the top restaurants on land.” It’s on the Panorama deck, so has great views and I found the sushi really very good, as was the Thai Beef salad, the Shanghai ribs and the Szechuan ribs.

Other restaurant options that looked rather tempting were Sel de Mer, a snazzy seafood restaurant which aims to serve seafood bought as much as possible from local suppliers at the ship’s ports of call. Plus the Grand Dutch Cafe, which offers coffee, Dutch lager and cakes in a bar style setting and is a great mid-morning pit stop.

When not eating – those spare moments

As to the ship itself, it’s as modern and stylish as you’d expect with a range of various priced and very comfy staterooms. They all feature USB sockets next to the European and US mains sockets, so no need for adaptors to keep that phone charged any more. A small touch perhaps but a thoughtful one.

There’s lots of storage space to keep the area free to move around in and the bathroom was one of the largest and best equipped I’ve seen on a ship.

My stateroom had a good sized balcony, as do most, and the bed was a delight and, going back to food for a moment, you can have a whole range of meals delivered to the cabin at virtually any time and all-inclusive, including a good selection of breakfast options.

There’s plenty of live entertainment on board to suit most tastes with the Lincoln Center Stage with live chamber music and the BB King Blues Club, as well as a massive show theatre. There’s also a spa, a fitness centre, luxury shops, the pools of course and all the usual entertainment you’d expect on a cruise liner and all done very well.

Holland America, as the name suggests, is a blend of European and US style cruising and that makes it pretty unique in the cruising game. Food wise it’s up there with the very best in its class and the Koningsdam’s reasonable size makes it a place that’s easy to hang out in-between meals. All aboard.

The Koningsdam’s cruising schedule for 2016 can be found on their website as well as more information about this remarkable ship.