Nick goes to Anglesey to earn his salary (sic) by seeing Halon Môn salt created and how Green & Black’s chocolate is making new use of it.

‘Every day whatever the weather I come down to the water’s edge and use this device,’ says David Lea-Wilson co-founder of the Anglesey Salt Company waving a curious kind of measuring instrument that looks rather like the thing doctors poke in people’s ears.

It is in fact a  refractometer and accurately measures how much light bends, or refracts, when it enters water. The more salt dissolved in the water, the more resistance the light will meet and the more it will bend.

This device is crucially important because the seawater here is what goes to make Halen Môn salt, widely regarded as one of the best sea salts in the UK if not the world. And it’s the salt Green & Black’s have chosen to go into their new Dark Sea Salt THIN bar.

We’re standing on the beach of the Menai Strait in Anglesey and it is quite beautiful, what with the fluffy white clouds only sparsely blocking the blue sky and the view across the water being absolutely magical.

The water here is exceptionally clean and pure, all helped by the local mussel beds. The mussels are living filters that take in seawater and cleanse it and the water then passes through a natural sandbank filter before arriving in the process rooms 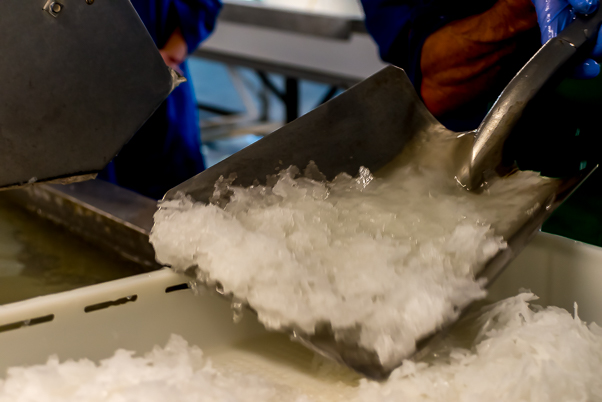 The end result is Halon Môn, a salt of remarkable snow-white appearance with delicate flakes that can be easily crushed between finger and thumb. A few hundred yards away in his eco-friendly plant David shows me the process, nearly all done by hand, whereby the water is encouraged to give up its special treasure.

The salt water is first gently heated in a vacuum so it boils at a low temperature, evaporates and leaves behind a strong brine. The brine is then pumped to shallow crystallisation tanks and left to allow the sea salt crystals to form, and once the crystals appear they’re harvested by men with shovels before the flakes are rinsed in brine until they shine.

‘Green & Black are as fussy as we are about quality and they wanted a particular size of salt flake,’ David says, ‘and so we hand sieve their salt batches to give them exactly what they want.’ But why salt in chocolate at all?

For the increasing number of salted chocolate fans it’s because the little crunches of salt within the chocolate, release extra flavours to the palate and actually, odd though it may sound, make the chocolate taste sweeter. It’s a very adult kind of chocolate experience and perfect for Green & Black’s new bar.

Green & Black’s buy Fairtrade beans, at a fair price obviously, predominantly from cocoa farmers in the Dominican Republic who use organic farming techniques and so Halen Môn’s organic, passionate approach is the perfect fit for Green & Black’s  and for David too.

The salt he and his wife Alison make has Protected Designation of Origin status and is used by the world’s finest chefs. For example when Ferran Adria of El Bulli used to serve an oyster with just one tiny flake of sea salt on it, there was only one salt supplier he chose. Pictures on the wall testify to the endorsement of Heston Blumenthal and the Hairy Bikers among others and Halen Môn is the salt on President Obama’s favourite chocolate treats too.

Brandt Maybury is Green & Black’s taste specialist and is in charge of creating new additions to its range. Using simple equipment in Halel Môn’s meeting room he demonstrates how the new THIN bar is made.

“The cocoa butter has six different fat crystals and they all need to be stabilised at different temperatures, ” he explains, “ the chocolate is first heated to 45°C to melt all the fat”. He then pours pour the molten chocolate on to a marble surface to cool it down to 27°C. Then the puddle of chocolate, looking like a giant chocolate button, is scraped and flipped and spread out to get the temperature right.

A touch of salt

Then with the chocolate back in the bowl and reheated he adds the Halen Môn salt before pouring the mix into moulds. As the chocolate cools it shrinks away from the sides and the solid bars fall out easily onto the worktop. We eat a few chunks – it’s lovely with 60% cocoa, just the right thickness and of course the salt.

Later that day I find Brandt with Coco, the Green & Black’s vintage French van, in the shadow of Beaumaris Castle. He and the team are handing out free samples of various kinds of Green & Black’s chocolates to the locals who seem very appreciative, particularly of the the new Dark Sea Salt THIN bar. The air hums with cheerful Welsh comments.

The next day back in London I crush a few grains of Halen Môn salt onto my boiled egg before plunging in a well-buttered soldier to make a wonderful breakfast treat. On simple food or in super fine chocolate, Halen Môn is a UK product to be proud of.