Up in the Terra Alta in Northern Spain, they have an almost religious reverence for white Grenache and a building to prove it. I cycle the Greenway to discover more

Sunset over the mountains

‘I’m not much of a cyclist,’ I tell the man fitting me out with my bike and helmet. To be honest, and I keep this to myself, the last time I rode a bike it had gears labelled Sturmey Archer and my short trousers had name labels.

‘That’s okay,’ he replies, ‘it’s all downhill from here.’ ‘Story of my life’, I think, as I try to get onto the saddle in a dignified manner. I fail and the bike shoots backwards and I make contact with the crossbar in a painful way.

We’re at the Horta de Sant Joan train station in the Terra Alta Tarragona province  in Catalonia, or Catalunya if you wish to be politically more (or less) correct.

It’s a small and very pretty town on a hill, inhabited for many, many centuries, and also a place where Picasso used to hang out.

There was once a single-track railway line that ran up to here created by republican prisoners of the war in 1942. 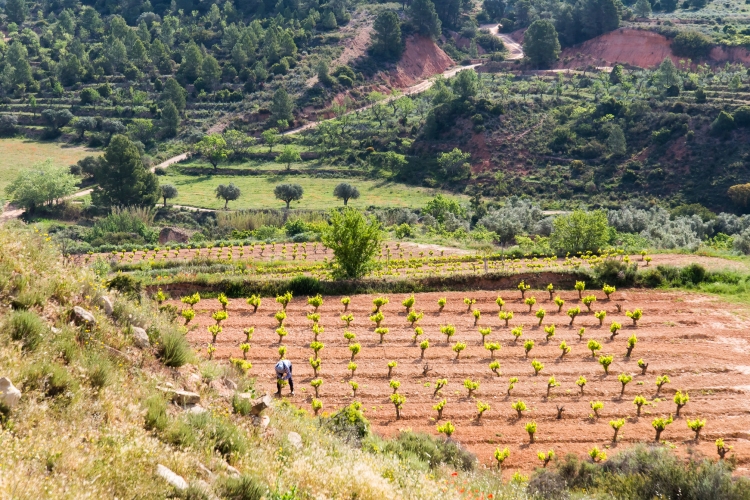 Little has changed for centuries

It was called ‘lo Sarmentero” by local people (it means bunch of grapes) because there were so many vineyards along its track. The railway was closed in 1973 when a tunnel between the villages of Pinell de Brai and Prat de Comte collapsed, and it languished unused.

Then in 2000 part of it was given back to the municipality who got rid of the track, tidied it all up and created the 130km “Via Verda” offering fabulous biking for whatever level of cyclist you are.

My route today is a short one, with the promise of a Grenache wine tasting at the end, so wobbling wildly from side to side for the first twenty feet or so, I launch myself down the old track, narrowly avoiding crashing into some lycrad up men heading uphill in a purposeful fashion.

Almost immediately I have to stop to take in my first view of the Natural Park of “Els Ports“, which is ravishing. Vineyards, as well as almond and olive fields, stretch away to the hills in the distance.

Small figures can be seen toiling away below, weeding and pruning. The silence is total. I doubt the view has changed much since Picasso’s time, apart perhaps from the Toyota Landcruiser I can see parked in a field. 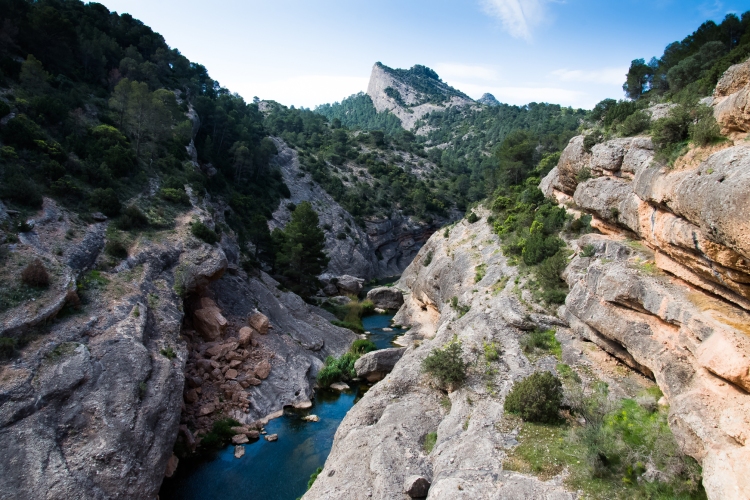 Back on the bikes, barely needing to pedal at all, we shoot through old tunnels, my feeble bike light barely giving me enough illumination to steer by and so adding an extra frisson of fun.

Then it’s back into the glaring sunshine and another pause to enjoy vertigo-inducing views down into gorges where streams and river cascade brightly.I try to take photos whilst moving, but that’s clearly going to end in disaster as I need both hands to steer.

Every angle reveals more stunning beauty.Then after about thirty exhilarating minutes we are at the bottom, in one of the most wonderful places I have been to in Spain or indeed anywhere, a place called in La Fontcalda. 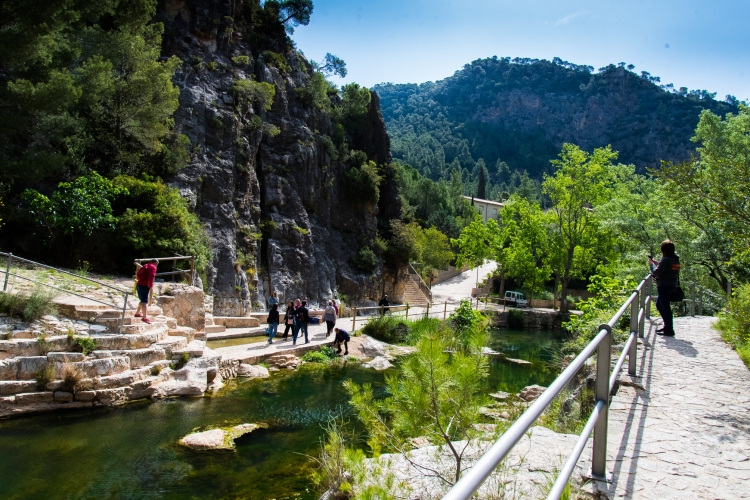 There’s impossibly blue water tumbling down amid towering rock faces and look, someone has set out a table for wine tasting. I can’t get my bike helmet off fast enough.

The someone is ViOrigen who have been organising cycling and wine tasting trips in the region since 2014 and they are particularly keen to sing the praises of white Grenache or garnatxa blanca as it’s called in Catalonian. 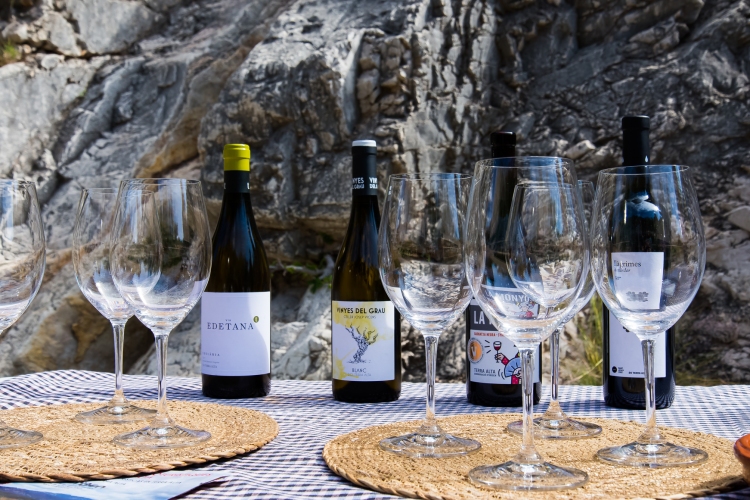 Go for the Grenache

It’s a grape has been grown in the Terra Alta for centuries, high in alcohol and low in acidity. We try various expressions and nibble on jamon sandwiches. We try Primicia Garnatxa Blanca, a 100% White Grenache with aromas of pear and peach and a little bit of peach too.

It’s a complex wine that uses grapes from 20-year-old vines that are not very productive. It’s one of 15 of 100% Grenache they sell and it’s all about bringing this local grape back to a position of respectability.

It was a very popular local wine back in the day with its high alcohol content and high producing vines, but economics went against it –  there was far more supply than demand – and so in 1984 local farmers were encouraged, in fact pretty much commanded, by the EU to pull up their grape vines and plant almonds and olives instead.

A Cathedral of Wine

In fact, so big a wine was Grenache in the early years of the 20th century, it needed a big place to make and store it hence the Pinell de Brai Wine Cathedral.

It was built between 1918 and 1927 for, and financed by, the local wine co-operative. Indeed some of the townspeople are still paying for it.

Designed by the architect Cesar Martinell, a disciple of Gaudi, it was built to handle the complete production process.

The 70 massive cement wine vats are empty now,  but once they made the basic table wine of Terra Alta –  called  granel  that people bought by bringing along their own containers to be filled.

It remains a stunning building though, both in design and in its beauty and you can enjoy the architecture as well as the wine shop, now a treasure trove of local wines and olive oil that is still pressed in the building using the original press. 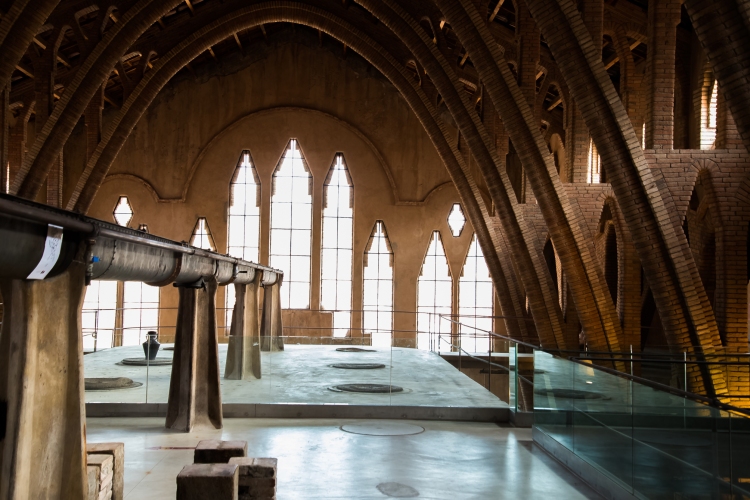 Not called a cathedral for nothing

I bought wine and oil and back at the hotel, the perfectly located Can Josep Hotel where the food was excellent and the valley views from the dining room quite stunning,  I stuffed them in the suitcase ready to head home.

The Terra Alta may not be on everyone’s radar as a wine destination, but when you factor in the stunning scenery and the bike trails with their various degrees of challenge, you have somewhere much more interesting than the average vineyard trail.

To the Catalan Tourist Board for all their help

Fly to Barcelona and hire a car. Around 2 hrs drive.